@crtwotwo @mountainmotorsports_ #honda CRF450R with mechanic @sheetmetal220 . . Photo 2 - @nihiloconcepts makes these cool fork guard braces for Chad's bike. This reinforces the guards from being completely ripped off during the event of a crash or close start. . Photo 3 - Chad had a couple works Nissin front brake calipers left over from his time on Honda in the past. The team was able to throw those on to Chad's 2020 race bike. . Photo 4- The radiator cap is a 1.8 .This cap is off a KX65 . Most of the teams are running a 1.8 or higher for Supercross. This is just some added insurance when the bike gets hot that the cap doesn't blow off the top during racing. . . Photo 5- Works Chassis Labs provides the engine hangars for Chad's bike. They have quite a bit of options to choose from. Ben has been using these as a tuning tool because they don't have a dedicated suspension guy at the races. They play a lot with different combinations to get more comfort out of the motorcycle. There is a soft, medium, and stiff option for both the top hangar and lower engine hangar. . Photo 6- The swing arm pivot is a titanium item from @mettec_titanium . . Photo 7- Nihilo makes a copy of the works Honda pegs that Chad runs on his CRF450R. Nihilo makes the titanium peg, pin, and mount. . Photo 8- Pro Taper provides the sprockets with a DID chain on Chad's Honda.Pro Circuit axle blocks are placed with a titanium rear axle. Because the blocks are so big the chain adjuster screws can be pushed in close to each other. The position of the rear wheel is actually pretty far out. Usually this is done to provide more stability. . Photo 9-. The works Showa rear shock that features a titanium spring . Photo 10- One thing that Chad is very particular about is his seat. He does not like a stiff seat what so ever. As long as the cover isn't beat up or ripped Ben won't change it between races because Chad likes the broken in feel that much . Photo/story @tfant612 . . #dirtbike #magazine #supercross #parts 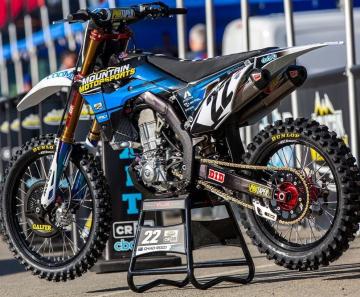