Last year the Honda CRF250RX came out in direct response to KTM's on-going takeover in the American off-road market. The old Honda plan would have been to keep on making bikes like the CRF250X--meaning quiet, clean, responsible and boring. Instead, Honda came out with a borderline outlaw of an off-road bike. It was a focused racer---no EPA certification, no oversized muffler and no apologies. That was already a fairly unHonda move. Now, in only its second year, the CRF250RX has been redesigned. The 2020 model has a new frame, a redesigned head and a long list of changes. In the Honda universe, that almost never happens. Honda didn't supply handguards on the stocker, so budget that in as well. We installed Acerbis Uniko vented handguards. Then we went a little off the reservation. Like all motocross bikes, the Honda runs hot. If you use the clutch heavily on a warm day, chances are you'll boil over at some point. Instead of installing a radiator fan, we addressed the issue more directly with a Boyesen Supercooler impeller. Boysen just developed this system specifically for the Geico motocross team and has had good initial success. We combined that with Evans waterless coolant, which virtually eliminates the boil-over issue. . . #dirtbike #offroad #magazine #news #online #print #media #video #outdoors #adventure #honda #test 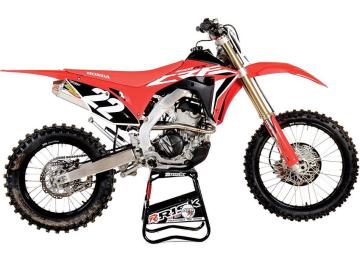