Your social media feed might be filled with electric two-wheelers launched or unveiled at this year's expo. But let us add one more to that list -- the Evolet Raptor. The Gurugram-based EV maker had first showcased the Raptor a few months back, when it launched its electric scooters, the Derby and Polo.

Just like most EVs out there, the Raptor also gets a digital instrument console, LED lights, and what seems like ride modes. We haven't ridden the scooter yet, but by the looks of it, the Raptor looks like quite a comfortable e-scooter.

The electric maxi scooter is powered by a 3kW motor, which allows it to have a top speed of 100kmph. It is equipped with a 40Ah battery, which will take around 3-4 hours to fully charge. However, the company hasn't announced if this time is achievable with a fast charger or a standard 5AMP socket. Evolet also claims that the Raptor has a range of around 100km to 250km and a top speed of 120kmph. But we aren't too sure about these claims as the banners outside the stands state a range of 150km and a top speed of 100kmph. *insert a 'you had one job' meme*

So when will we get to see this scooter in the flesh? The company says the Raptor will be available in showrooms by June 2020, but there is no word on the official prices yet. 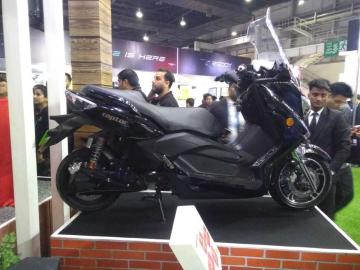