How To Carry Absolutely Anything On a Motorcycle

"No, that'll never work," says a skeptical non-rider you know. "You can't possibly use your bike for practical purposes that involve carrying things!"

You might love that non-rider, but they're wrong, and here's why.

What you can carry on your bike is largely limited by two things. The first is, of course, what bike you have. Does it have panniers and/or a top box? Does it have a funky frunk? Is the undertail section totally smooth and devoid of anything you can solidly hook with some bungees? Are you a humongous, actual bear riding a tiny motorbike---and thus, using all or most of its manufacturer-recommended carrying capacity? Does your bike even have a rear seat or rack where you can stick stuff?

All of these factors can and will affect what you're able to carry. If you're lucky enough to have a big rear seat and bungee hooks, a whole world of lugging ridiculous things directly behind your back will open up before you. Here are some things I or a companion have personally strapped to our back seats over the years, in no particular order:

I've often joked about starting stuffonmybike.com just to post photos of hilarious stuff I've strapped to the back of my bike. Are there times when driving a car is a better option? Sure, but most of the time, you just need some bungees and a little creativity. I mean, I'm probably not gonna take my pets to the vet on my bike, but inanimate objects? I mean, I won't be hauling a dining room table on the back of my bike any time soon, but reasonable stuff? Give me a minute, I'll figure it out.

That brings me to my second point: should you put it on your bike? That's a question only you can answer. Most of us don't want to take messy, leaky stuff on our bikes if we can avoid it. I mean, there's obviously a huge difference between the KLRs that Kate and Justin actively spend time getting dirty and your baby that you polish to a mirror gloss every time you pass it and give it loving glances.

Things that are heavy enough to upset your handling, or that you can't safely and securely strap down are probably best transported some other way. The same goes if they're just too physically large to maneuver safely. Someone could probably find a way to strap a ladder to the side of a bike and still ride it, but would you really want to do it, other than to be a contrarian and prove a point?

It might seem like an unusual thing to contemplate in a country where the majority of the population doesn't rely on motorbikes as everyday transport. However, if you spend a bit of time in any of the many places in the world where motorcycles are a super common way to get around, you'll come across any number of creative solutions to inspire your future motorbike hauling. Also: strong, regular bungees are great, but a bungee net can seriously level up your ability to strap stuff to your bike, as long as you have good mounting points for it. 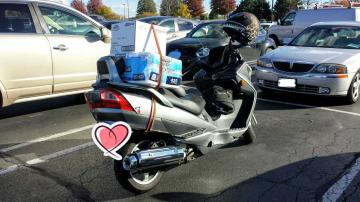