Modern aesthetics favors clean, simple lines and intuitive, flowing designs of the kind that work some kind of strange, visually tactile magic. You can almost feel the really good designs in your hands, simply from seeing images. Z Motorcycle is a great example of this phenomenon. It simultaneously feels brand new, but somehow already familiar, as though you're half-remembering it from another timeline.

Joseph Robinson loves designing automotive concepts in his spare time. A design student who's loved cars all his life, it's probably no surprise to learn that's mostly what features in his portfolio. He's heavily focused on electrics, and making the kind of visually striking designs that simultaneously honor where some existing manufacturers like Mazda and Bentley have been as well as show a path toward where he thinks they should go in the future.

Besides clearly being a shoo-in for the first-ever Sesame Street staff motorcycle, Z Motorcycle differs from Robinson's car designs in that it isn't attached to any specific brand. Therefore, it isn't drawing on existing production motorcycle designs, although you could make a reasonable case for some influence from the TRON: Legacy light cycle. The frame looks like a stylized stick-figure version of riders in TRON hooking into riding position, attached to the front and rear wheels.

On Z Motorcycle, however, the rider sits above all that. Thoughtful features like foldaway handlebars and footpegs add to a feeling of usability and practicality. It's a future device that looks inviting and approachable. I'm uncertain how well it would turn, but it's a concept , not an actual bike that exists in the world at this point. The bones of the structure are there, and they're good. Seeing optimistic projects like this is one of the most exciting things about where we are with electric motorcycles today. 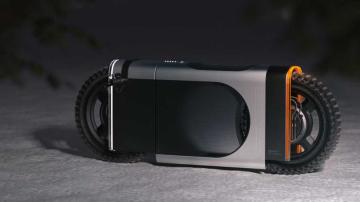