Released in the early 1980s, the Honda CB250 Nighthawk quickly became an immensely popular model for the Japanese marque. That was largely thanks to the quarter-liter parallel twin's maneuverability, utilitarian nature, and bullet-proof reliability.

Despite al its strong suits, the chopper-inspired CB250 has never been much of a looker. But that didn't stop Mike and Tom of Greece's Urban Mechanics from recognizing the little CB's potential for customization, and putting the Honda up on the bench.

"Our latest creation is codenamed 'Velos' which is Greek for 'arrow,'" the boys tell us. "We decided to do away with the small chopper look, and create a new scrambler aesthetic that's more conducive to the lightweight nature of the motorcycle."

The pair started by stripping the CB250 down to a rolling chassis, and upgrading the suspension. The stock Showa forks remain in play, though they've been serviced and fitted with small internal spacers to preload the springs a tad more.

Out in back, the stock shocks have been swapped out for new adjustable units from K-Shock --- a fellow Greek outfit specializing in producing suspension components for small displacement bikes and scooters.

Not jiving with the build's intended scrambler vibe, the factory cast wheels were also chucked aside in favor of a set of spoked hoops now shod with knobby Continental Twinduro rubber.

"We replaced the stock items with spoked wheels from a Suzuki TU, changing the spokes to stainless steel ones and powder coating the rims in satin silver for a more classic look," say Mike and Tom.

Next came the bodywork. The baby Nighthawk's tank was plucked, binned, and replaced with a slightly smaller cell off a Honda 125, which boasts a similar silhouette.

In place of standard Honda badges, Mike and Tom have bestowed the tank with a set of aluminum "UM" emblems. From there, a set of punched-out side covers with rounded edges were laser-cut from aluminum and then hit with a coat of silver paint accented with a champagne-colored section at the bottoms.

Giving the build its 'arrow' moniker is the piece de resistance: an elaborate set of hand-formed, one-off fenders.

At the back, a short convex fender comes to a sharp point, while an inner fender shields everything north of the back tire.

"We wanted to experiment with creating our own tail lights and after some trial and error we decided to go with a transparent laser-cut Plexiglas piece that has an LED taillight at the hidden end," say the boys.

"There's also a second level [not visible in the photos] that enables it to double as the rear turn signals," says UM.

Wanting a more low-profile headlight without straying too far from the classic round headlight-look, the UM boys called on their countrymen at C-Racer to give them one of their ABS plastic headlight masks which Mike and Tom proceeded to modify to accommodate a new LED headlight.

But it doesn't stop there: where the top of the new headlight mask curls up over the front of the top triple, the UM duo have installed a slightly-angled Motogadget Motoscope Mini , along with a small integrated toggle switch and warning light.

The cockpit was revised, receiving a set of braced, aluminum MX-style bars that have been powder-coated in black, set in aftermarket risers, fitted with fresh grips and modern switchgear. There's also a plush custom seat with bespoke stitching that rides up onto the tank in front, and perfectly folds over the new fender in the rear.

"The seat is stitched in high-quality marine leather. The stuff is mostly used in yachts and has a special coating that lets it withstand sunlight and salt," say the UM crew.

Surprisingly, the original airbox and battery are still present, too. "We wanted this build to be as weather-proof as possible so having open filters would be less than ideal. This way the bike also gets to keep its fuel consumption at normal levels."

The stock exhaust was also binned to make room for a full custom system. Polished headers now feed back beneath the engine before exiting underneath the rear brake, and ending in a blacked-out SuperTrapp can with a custom with a reverse-cone tip.

The stock frame and swing-arm, plus the lion's share of the exposed metal on the bike, have been powder coated in a matte black. The tank now sports a dark turquoise hue and the fenders are adorned in a satin silver that matches the side covers.

A fine amalgamation of old and new, UM have managed to cram subtle and thoroughly modern features into this build, while still keeping the bike planted in the vintage scrambler genre.

Mike and Tom have delivered a stellar-looking scoot that 'goes as well as it 'shows.' 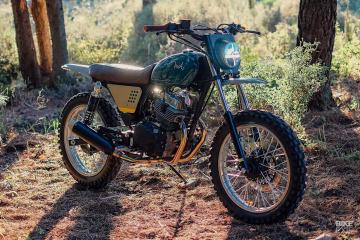