crank out the same style of build, over and over again. But for Federal Moto that would be terminal. Their crew is young, eager to experiment and wary of stagnation.

So when a local film production company approached Federal to build a custom bike, they picked a genre they hadn't yet tackled. For their seventeenth project, commissioned by Divisionist Films , the Chicago workshop created their first BMW-powered bobber.

"Eight years ago we started off as a 'cafe racer' custom shop," says founder Michael Muller, "and here we are now moving into the bobber genre. We want to be a diverse shop that isn't tied to one style of moto ... motorcycles are fun, who said you can't play with all of the kinds?"

Federal started by sitting down with their client, and going through reference material to figure out what would hit the mark.

The resulting concept was a skinny monochrome bobber based on a /7 series BMW boxer. And as luck would have it, Federal had a 1978 BMW R80 /7 laying around the shop and looking for a good home.

The R80 needed some love though, so Michael and Federal staffer David Pecaro started by rebuilding the 797 cc motor, five-speed transmission and Bing carbs. The work included new seals and rings, a new electronic ignition, and NGK spark plug boots and cables.

The motor was beautifully finished with a mix of ceramic paint and hand-polished touches. Federal also added custom-made velocity stacks, and custom exhausts with turned tips and a Cerakote finish.

The BMW's running gear didn't go neglected either. Federal grabbed the forks and six-piston Tokico calipers from a 2008 Suzuki Hayabusa, and hooked them up to an upper triple tree and steering stem from Cognito Moto.

A new set of 18" rims was laced up with stainless steel spokes from Buchanan's, using a Cognito Moto hub up front, and they're wrapped in Dunlop K180 tires. Federal also had the forks anodized black, and the rims powder coated.

Out back, the crew built a minimal subframe, with support for the solo seat and revised shock mounts. A new pair of 15" shocks now holds up the rear end. There are hand-rolled fenders at both ends too, attached to custom-made brackets.

For the fuel tank, Federal sourced a 1977 Husky 125 item---but it was pretty banged up and rusted. They tidied it, fabricated a new tunnel to match the BMW's frame, and welded in a new cap tunnel and petcock bungs. The gas cap is a custom knurled aluminum part. Chris Paluch designed the subtle fuel tank graphics, which NSD Paintwerks then executed.

Right behind the tiny tank is a scant little bobber seat, upholstered by Dane Utech, a Chicago local, using suede and leather from Relicate Leather. Dane covered the 'passenger' pad too and did a stellar job---but you'd need to be brave (and petite) to take a ride on the back of this bobber.

One of Federal's biggest challenges was the boxer's stock Bosch ignition coils (they're big, and usually sit under the tank). So the guys sourced a dual pole Dyna coil, and mounted it under the starter cover. They also rewired the bike around a Motogadget m.unit blue Bluetooth-enabled controller, stashing it away under the tank.

The bulky battery was replaced with an Antigravity Lithium-ion battery, which sits in a custom-made box just in front of the rear wheel. It's been designed so that its back edge traces the radius of the rear wheel; a neat little touch.

In the cockpit, Federal fitted 7/8" Biltwell 'Tracker' bars , and a speedo, push buttons and bar-end turn signals from Motogadget.

It's also sporting new levers, a set of OEM BMW cables, and Goodridge brake lines. A 5.75" lamp lights the way out front, and a small LED taillight is mounted to the swingarm.

Lean and purposeful, Federal Moto's first foray into bobbers is a total knockout. If this is what it takes to stave off complacency and boredom, count us in. 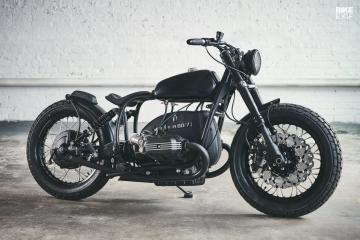