Indian Scout racer in Siberia, the first Yamaha Yamaha FZX750 we've featured, a classy Monster from Revival Cycles, and what appears to be a two-stroke Suzuki Katana ... but isn't. Yamaha FZX750 by Barracuda Moto

We've never featured a Yamaha FZX750 Fazer on EXIF in past: it's one of the more obscure bikes out there, and not particularly suited to customization.

Despite a long production run from the early 80s to the mid 90s, relatively few were made, and were chiefly notable for their carburetor setup: four downdraught Mikunis concealed by the tank, which had a design akin to the V-Max.

This scrambler comes from the Italian company Barracuda, and is a showpiece for their universal-fit parts. The FZX750 has aged amazingly well: the tank and side panels could almost be from a 21st century design.

The cockpit is all new, with Barrucada bars and mirrors, and the standard rectangular headlight has been swapped out for a classic circular lamp with a compact wind deflector above.

It's a quite remarkable transformation. If you can find an FZX750 going cheap in your local classifieds, and you're an adept home builder, it's a build you could replicate without breaking the bank. [ Barracuda Moto ]

An Indian Scout ice racer in Siberia When we first featured this Indian Scout drag bike from Brice Hennebert of Belgium's Workhorse Speedshop , it became one of the most popular bikes of 2019.

After a stint in the Sultans of Sprint race series, 'Appaloosa' has been reconfigured for the frankly nutso ' Baikal Mile ' ice sprints in Siberia. With specially prepared 1/8-mile and 1-mile ice tracks, teams are attempting to set speed records alongside stunt riding, drifting, and drag racing events.

Dunlop SportSmart Mk3 tires have been hand-fitted with hundreds of studs, a task that took Brice's mechanic, Dorsan, four days of work. To limit engine cooling, the 'mouth' of the fairing has been closed off with a new carbon fiber nose cap and smaller cooling intakes have been added to the side fairings.

The Scout will be ridden by Sultans of Sprint founder Séb Lorentz (above left), who is a very brave man indeed. We wish him and Brice the best of luck.

Ducati Monster M750 by Revival Cycles We tend to associate Revival Cycles with extreme, high-end builds---such as the incredible titanium-framed ' Birdcage' BMW . But the Texas shop is equally capable of tweaking and refining more prosaic machinery, such as this lovely 1999 Ducati M750.

The owner had already had the frame powder-coated, and swapped in a Ducati SportClassic front end, an Öhlins shock and CNC-machined rearsets. Revival fabricated new mounts under the fuel tank to locate a Motogadget m.unit, an Antigravity 8-cell battery, and a MOSFET style reg/rec from Rick's Motorsport Electrics. They also squeezed in the factory ignition coils, horn, and starter solenoid.

A full custom wiring harness was built from scratch, Motogadget Mini switches were fitted to LSL bars, and a Hypermotorad top triple clamp was adapted to fit the Monster/Sport Classic front end. The seat pan and foam were reworked to fit the fuel tank and frame much better than the factory pieces, and the reworked seat was upholstered in a simple black leather design.

Revival have also refinished the engine and belt covers, and rebuilt and rejetted the Keihin FCR flatslide carburetors to suit the Termignoni high exit dual exhaust. The final job was a repaint in Porsche's Graphite Blue, with a custom gold Ducati logo in the Atari font on the fuel tank. Just lovely. [ Revival Cycles ]

Yamaha RZ250R by Chibaac At first glance, this bike had us completely confused. A two-stroke Katana ? How can that be? On further investigation, it turns out to be a custom based on the mid 80s RZ250R , the first roadgoing bike to feature Yamaha's 'Power Valve System' (YPVS)---a variable exhaust valve. It also had a wide double-cradle frame, weighed just 145 kilos, and pumped out a very healthy 43 horsepower.

The Japanese builder (and owner) is known simply as Chibaac, and he's obviously very talented. He's used air-cooled Katana parts for the front cowl, side cover, and fuel tank, and given the headlight a center strip like the new Katana.

The top triple and forks are from an Aprilia RS125, and the seat/tail unit is from a Yamaha YZF-R6---which is a surprisingly good match for the modified Katana tank. On the mechanical front there's a modern aftermarket ignition system, and the engine breathes through a new Keihin PJ38 carb.

A long, square swing arm is from a Yamaha TZR250, the rear shock is an Aprilia RS1000 unit, and the wide 18-inch wheels are from a Harley-Davidson Fat Bob.

It's a curious but very creative mix of parts, and we bet this little ripper will be great fun at the traffic lights Grand Prix. [ More ] 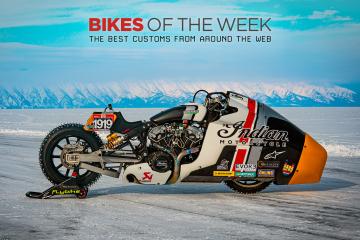