are constantly mining the custom scene to produce stylish new motorcycles, so it's getting harder for riders to choose between stock and custom. New bikes are looking better than ever---and they mostly perform well right out the box, too.

But custom still trumps stock in many ways, and some riders prefer the simplicity of older machines to the tech wizardry of contemporary motorcycles. This steezy Honda Dominator from HB-Custom in Germany is physical proof---because the owner sold his modern bike to make space for the build.

The man behind HB-Custom, Holger Breuer, fills us in: "The customer had already had a bike from me, a Honda CB900, and was very happy with it. I presented to him the idea of a cool and very light street tracker as an alternative to his Husqvarna 701 Vitpilen ."

"It took just five minutes, and he decided to sell his 701 and we started the project." Holger sourced a 1992 Honda NX650 Dominator, dragged it into his workshop in Husum, and got cracking.

Since the Dominator was set to replace a perfectly fine stock machine, it had to be reliable. So the motor got torn open, and rebuilt with new pistons and valves. Holger also installed a Mikuni TM40 carb, fed by a K\&N filter.

The engine looks good enough to eat off, with a mix of gloss black and clear finishes. It's capped off with a custom built two-into-one exhaust system (yes, the single cylinder NX650 has dual exhaust ports).

Holger brought the Honda's electrics up to date too, with a full rewire around an Axel Joost Elektronik B-Box. (It's a small control box, similar to Motogadget's popular m.unit).

As for the chassis, Holger kept the suspension stock, but dropped the front a touch. Then he swapped the Dominator's wheels for a set of street friendly 17" hoops, wrapped in Continental TKC80s.

The brakes are original too, but they've been updated with Brembo discs and a Magura HC1 front radial master cylinder.

The Dominator originally came with some distinctly 90s rally-style bodywork, but that's all gone now. You might recognize its new fuel tank though---it's from a Yamaha XT500 , modified to sit on the Honda frame.

Just behind it is a brown leather seat, sitting on a custom built subframe with a simple kicked-up loop at the back. Tying everything together is a pair of hand-shaped aluminum side covers, and high-mounted fenders at both ends.

Holger did a neat job with the cockpit too. You'll find high and wide Magura handlebars, new switchgear, brown grips to match the seat, and a tiny digital Motogadget speedo.

It's discreetly mounted just in front of the bar clamps, and even includes a small dash with the requisite dummy lights.

Out front is a super bright LED headlight from Koso, and there are Kellermann turn signals all around, with the rear pair doubling as taillights.

Holger's client is quite conservative, so he called in help to visualize not only the final livery, but also the actual lines of the build itself. Himora Motors came to the party, kicking out multiple designs and revisions over several weeks. The client finally settled on this striking white, green and gold combination---proving that he has exceptional taste.

The bike actually looked more radical at first, because the design called for a white frame. The frame had already been powder-coated when Holger got the call to change it to black, so it had to get stripped and redone.

But that was the only hiccup, as Holger recalls. The rest of the project went off without a hitch, taking roughly 90 days to complete. After all, Holger's original concept was straightforward: "Build a bike for an urban environment---light, strong and cool looking." 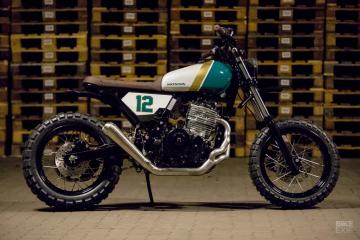