while since we've featured a classic Honda CB café racer. The custom scene has splintered and grown a lot over the past few years, and Honda inline fours are no longer ubiquitous.

But occasionally a good example of the type pops up, and this example from Poland is very good indeed. The delightfully named 'Friday' comes from Jacek Mulak, who is based in the ancient city of Lublin and runs Cardsharper Customs.

The commission came from designer Michał Ćwiek , who brought along a rather sorry looking 1977 CB550 .

"The CB550 was already partly customized," says Jacek. "But it was a very amateur job, done by the previous owner. None of those modifications have been preserved."

Michał is a graphic designer and owns a creative studio, so he presented a concept to Jacek. "It was a classic café-style build with an empty 'triangle' under the seat and a upside-down front end. He wanted classic solutions combined with modern details."

Cooperation with another designer would be a challenge for most bike builders, and Jacek was wary. But it worked out just fine: "We quickly found a common language, and Michał often relied on my experience and the solutions I proposed."

The biggest upgrade is at the front, where Jacek has grafted on Suzuki GSX-R forks, shortened by just over an inch to level out the stance. Refitting the original CB550 wheel also required a little ingenuity, but it was worth the effort to maintain the classic good looks.

Jacek has kept the GSX-R brakes too, but had to design and mill new triples because the GSX-R triples did not allow for enough turning radius.

It's all tied together with a new wiring harness, topped off with an LED headlight and compact LED front indicators.

The rear suspension has been upgraded with new shocks, but the 17-inch wheel comes from a supermoto---chosen for its extra width and smaller diameter. It's married to a GSX-R brake setup, matching the front and giving extra performance.

The tires are Metzeler Tourance all round: despite the chunky tread pattern, they work exceptionally well on the street.

Above the back wheel is a slim new subframe with a slight upwards kick, topped with an extremely elegant new leather-seat-and-tail unit that also conceals the battery and some of the electrics. The proportions are perfectly judged and the finishing is top-notch, with a thin strip of LEDs on lighting duties.

The engine has been treated to a refinish with high temperature paint and polished covers. Foam air intakes are matched to a free-flowing 4-into-1 exhaust system, with the carbs rejetted accordingly. Jacek dryly describes the sound as "reasonably loud, with nice bass."

There are far too many little details to mention, because the attention to detail on this CB550 is magnificent. Virtually all parts have been refurbished---via galvanizing, polishing or powder coating---or replaced.

Owner Michał designed the tank paint, which includes his logo and a mix of matt and glossy varnishes, plus a laser engraved emblem.

Like everything else on this graceful and refined machine, it looks stunning. And it's physical proof that quite often, two heads are indeed better than one. 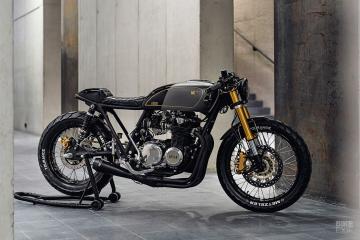