Is This The Best Used Bike Ad Ever?

Even if you didn't want this Royal Enfield Himalayan before, you do now.

Flipping through bike ads is a hobby for many of us. Your weapon of choice might be Cycle Trader, Facebook Marketplace, Kijiji, or Craigslist (well, maybe before it started charging for moto ads that is---it's pretty slim pickings now). It probably doesn't matter which site or app you use, because some people just completely make stuff up. Not this seller, though! This, my friends, is probably one of the best used motorbike ads you're ever going to see.

Plenty of Royal Enfield Himalayans (OK, maybe just the one in this ad) were injured in the making of this video. That's the point. Still, perhaps we should all look on the bright side. This definitely isn't a garage queen! In its short lifespan, this bike has lived its life . It's seen things you people wouldn't believe. It comes ... wait for it ... pre-dropped! No need to get tense about when your first tip-over is gonna happen, because my friend, it already happened before you got there.

If I slapped the tank on this bad boy, it'd be totally fine, because it's already been slapped and bashed and dented and bruised and dropped and kicked and fallen over and thrashed plenty of times ! I have to say, it's too bad I don't have a DR650 that's looking for a new home. If I did, it might just be worth hopping a flight to Australia to do a straight-up trade. Trading cards ? Nah. Trading bikes? Yeah!

Really, this might just be the perfect bike, if what you're looking for is a Himalayan that's about a year old and still has 12 months of transferable Royal Enfield warranty left. It's a good, honest bike with a good, honest (and hilarious) ad. I hope YouTuber Riding On Eggshells gets plenty of legitimate interest in this bike, and look forward to seeing videos from her upcoming round-the-world trip in the future. Also, I hope Pooja the Himalayan does find a good home with someone who appreciates all her lovely individuality. Take it from loads of motorcyclists the world over: scars build character! 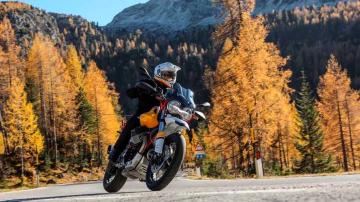