themed custom motorcycle conjures visions of bad reality TV choppers, and sends us into convulsions. But this scrambler is a theme bike with a big difference: It's so tastefully executed, we didn't realize there was a theme. Until builder Chris Tope revealed the story behind it.

Chris was asked by motorcycle photographer Michael Lichter to build a bike for his 'What's the Skinny' exhibition at the Sturgis rally. Chris already had a suitable and very skinny donor to hand---a beat-up 1973 Penton Mudlark outside of Dallas, Texas. He'd been eyeing it for years, and now it was finally time to pull the trigger.

Chris had a very specific style in mind too, dubbing his project the 'Ice Pick.' "I had previously built a surfboard bike, a café racer, and a desert sled bike," he explains, "so I decided to build a bike that was meant for the cold. It's the first of my builds designed to be ridden on ice."

"Every aspect and design of the Ice Pick was to make you feel her cold appearance---from the iridescent paint, to the studded tires, to the super sharp rear cowl made to look like an ice pick."

Never heard of the Penton Mudlark? We don't blame you---it's an extremely rare motorcycle. Bike-curious has a great story about its development, but basically it was a 190 pound trials bike with a 123 cc Sachs motor.

Only Penton didn't actually manufacture them---that was outsourced to a British firm, Wassell. The bike was ultimately a sales flop, and finding parts for it today is near impossible. But somehow, Chris made it work.

"For majority of the parts," he explains, "I found a couple of good sources around the country that had stock. For the parts I used from the bike itself, it took elbow grease and long hours to get them salvageable. And the parts I couldn't manage to get ahold of, I fabricated myself."

The motor went over to Jerry Birky over at KTM in Ohio for a full resto job, complete with a ported head and a new ignition. It's hooked up to a Bing carb with a modified K\&N cone filter, and finished off with a completely custom exhaust system.

The Mudlark is pretty 'skinny' out the crate, but Chris wanted to narrow its profile even more. So he ditched the dual shock setup, and fabricated his own mono-shock system. It includes a custom-made swing-arm, with a 1.75" extension and gussets for strength, and is connected to the shock from a Buell Blast.

Chris then restored and installed a set of 32 mm Ceriani forks up front. He kept the stock 21F/18R wheels, but polished them up, and re-laced them with stainless steel spokes from Buchanan's. A set of studded VEE Rubber tires makes the Ice Pick's intentions clear.

Chris did extensive work to the rest of the frame before everything went off to Atlantic Coast Plating for a full chrome treatment.

Up top you'll find the Mudlark's OEM fuel tank, followed by a hand-made aluminum tail section, tapered off to drive the 'Ice Pick' concept home. The seat itself is covered in white vinyl, done with a diamond-stitch by Dane Utech.

Kacey Elkins at Krossover Customs handled the bodywork paint, laying down an iridescent blue that resembles ice. On paper it sounds cheesy, but in reality it's a stunning effect that hits the mark. The gas cap got the same treatment, along with an emblem that combines two ice picks with a Union Jack, as a nod to Wassell.

There's more custom work going on with the rider controls too. Chris designed a set of handlebars, then got Josh at Crybaby Cycles to fabricate them. They're hooked up to KustomTech controls, and a set of custom grips that are made to look frozen.

They took some doing to create: Chris started with a pair of CNC grip sleeves from Mark Atkinson, then used a blue ice epoxy resin, finishing the bar ends off with inlaid moonstone gems. Even the footpegs are custom, and also feature a pair of gems.

There's one more custom touch in the steering stem: a 'hobo coin,' a signature on all of Chris' builds. "On this build it's a hand-engraved 1943 Liberty half dollar," he says, "portraying a motorcycle ice racer on a frozen mountain lake."

Chris' custom Mudlark nails both the 'skinny' and 'ice' themes without feeling one bit gaudy or overdone. But perhaps the most impressive part, is that he did everything in the 10 x 12 foot toy hauler section of his 44 foot travel trailer. You see, Chris has a full-time job that sends him to a new part of the US each year---his custom work, done as Utopeia Moto Company, is just an after-hours thing.

Not too shabby for a hobbyist working out of a trailer, right? 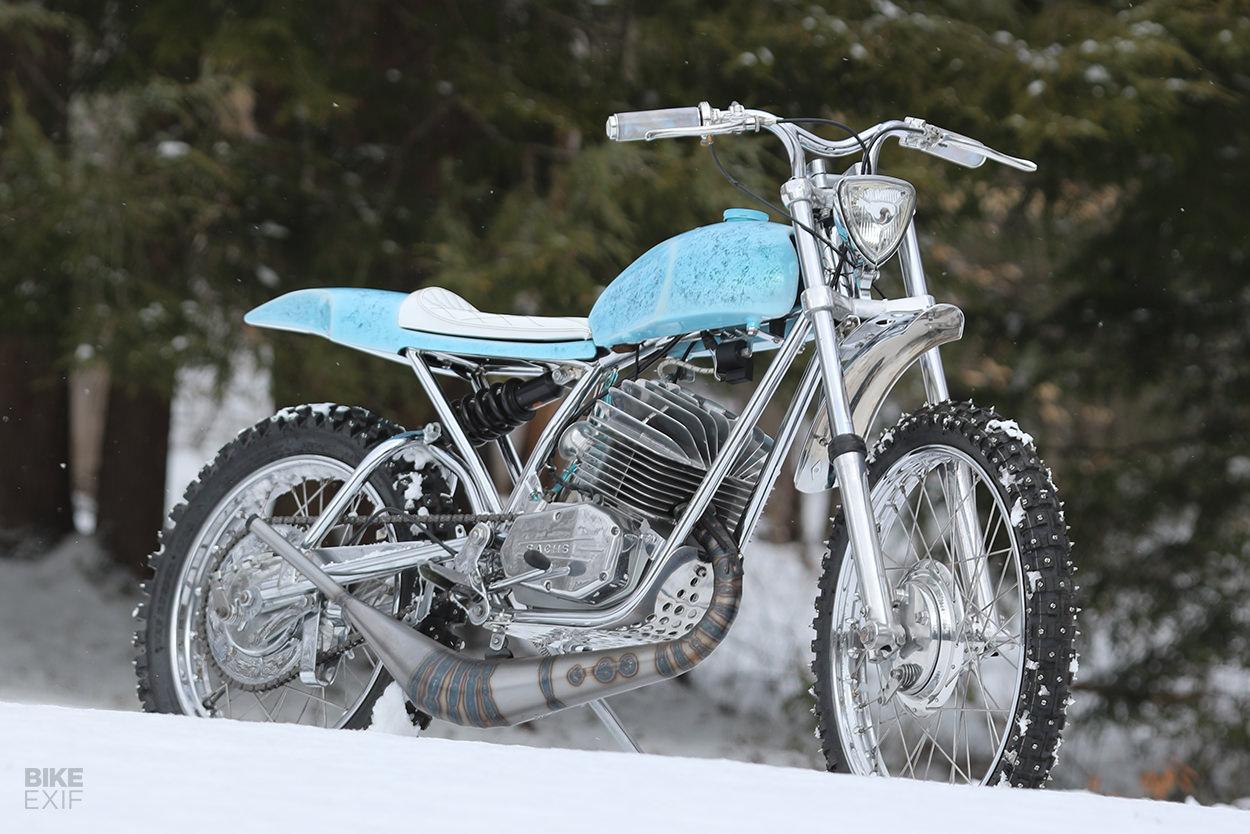