The county must also pay his medical expenses.

In 2016, motorcyclist Roger Gates was riding his Victory in West Milford, New Jersey when his bike struck several large potholes in the road. This upset the bike and caused him to crash into an oncoming van. Gates suffered several serious injuries and is no longer able to work as a result. A jury just awarded Gates and his wife US $2.65 million dollars in damages after this crash, plus medical expenses.

This crash took place in the County of Passaic, which is also the party that is judged responsible for paying Gates those damages. The stretch of road upon which Gates crashed has long been a problem, with documented driver complaints dating back to 2014 about potholes that "almost swallowed my vehicle," to directly quote one driver via the New Jersey Herald .

Residents in the area say that road crews occasionally came by and filled in the holes with asphalt, but then winter freezing and thawing would soon return the road to its usual state of disrepair. Despite that fact, residents complained, the county did not pursue other more permanent repairs.

The road had already been marked in the County of Passaic's records as being in need of repair in 2016, when Gates crashed. Prior to his crash, it last had work done in 2014. In the complaint, Gates' wife reported that she went back to the scene of the crash the next day to see if he'd left anything behind, and observed road crews filling in the potholes where her husband had crashed. It's worth noting that then-Governor Chris Christie had shut down Transportation Trust Fund Projects across the state, so this road didn't receive actual resurfacing until 2018.

Both Gates' Victory and the van he crashed into caught fire at some point during the incident. The driver of the van was uninjured, but Gates suffered multiple fractured ribs, as well as a fractured back, clavicle, shoulder blade, wrist, and hand. He also suffered a collapsed lung, torn neck ligaments, and serious pelvic crush injuries that resulted in permanent nerve damage. He required multiple surgeries, and is still undergoing a regular course of treatment to this day. 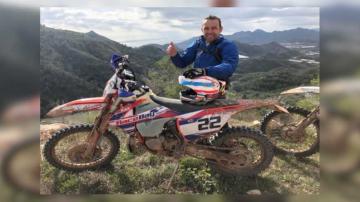