One way or another, it's going to be interesting!

As the old saying goes, "there's nothing more expensive than a free motorcycle." In this video series, two guys in Kansas picked up a true barn find, a long-disused 1980 Honda Gold Wing GL1100, and you can just smell it from here: this bike is going to be a lot of work!

The bike is the first model year of the redesigned 1100cc horizontally-opposed "flat-four" engine. When Honda introduced the Gold Wing in 1975 it sported a 1000cc flat four-cylinder engine, and it wasn't until the Interstate model was introduced in 1980 that it became anything like today's touring bike we all know and love. Initially, Gold Wings were naked bikes, with no luggage (not even a windshield!). This poor neglected example of the breed seems at first glance to be one of the naked bikes sold in 1980, but the presence of an onboard air compressor connected to adjustable rear shocks suggests that it is in fact a stripped-down Interstate model.

Anyone who's ever come into possession of a very old, very neglected motorcycle will recognize several bad signs in this one: the new owners have a lot of trouble moving it around, even after airing up the tires. The brakes are very obviously frozen (and I don't mean from the cold Kansas winter). The exhaust pipes are not stock, which makes me wonder about the state of the carburetors.

That the backyard builders immediately begin with plans for replacing the suspension without even putting a wrench on the engine's crankshaft bolt or testing its compression tells me their optimism may outstrip their talent as motorcycle restoration specialists, but hopefully that optimism will carry them through any setbacks they run up against, especially since neither ever learned the right way to pop a bike up onto its center stand.

Does anyone else wince when they don't stop to vacuum the acorns and associated detritus out of the airbox before moving right along with disassembly? It might just be me, but even when I'm working on a very old motorcycle, one of the big rules is: don't drop anything down the intake. Then they cut the exhaust bolts off and I am not confident they have a plan to get the remainder of the frozen header bolts out of those holes.

All of that and more will be tackled in upcoming episodes, I'm sure. This is going to be a giant learning experience for everyone, the guys in the video and everyone following along watching them, too. It might turn out great, or it might be a train wreck. Either way, it'll be entertaining.

Watch the acquisition video here , complete with questionable trailering practices, as well as the first episode in which they pull the bike out of the back yard and yank off the fenders and "gas tank" (which is really just a cover for that suspension air compressor). Good luck, guys! 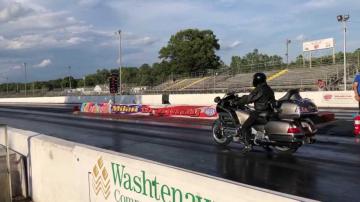