70s, the Yamaha RD 200 delivered more fun than a small capacity motorcycle had any right to. A compact two-stroke , it could cruise easily on the highway and, given a long enough straight, creep past 80 mph (130 kph).

The heyday of little two-strokes is long over---in the road going sense, at least. But memories take longer to fade, and Portuguese builders Pedro and Filipe Costa have dug deep into their past to create this stunning custom RD 200.

"A taste for motorcycles since childhood led us to build this machine from scratch," says Pedro. "I'm the mechanic and my brother Filipe is the welder at our C.Custom Garage workshop, and our idea was to build an unpainted motorcycle."

Pedro and Filipe like to use a multitude of metals for their bikes, including aluminum, bronze, copper, tin and stainless steel. And that confidence shows in every crease and weld on this Yamaha.

The base bike was a 1973 RD 200, making it one of the earliest in the Yamaha series. In their workshop in the bustling town of Vila Nova de Famalicão, Pedro and Filipe immediately removed and dismantled the engine, and stripped the rest of the Yamaha down to its component parts.

The brothers are members of that small and exclusive club of builders who can create a motorcycle from the ground up: virtually the only stock parts left on the finished bike are the motor, the wheel hubs and the (excellent) drum brakes.

Rather than refinish the existing frame, C.Custom have built a completely new one with elegant proportions and neat TIG welds, and finished it off in chrome. The swingarm was made in the workshop too, and also finished in chrome.

Sitting atop the new frame is a sleek one-piece tank and seat unit, crafted from aluminum and polished to a sheen that matches the frame. There's a small battery hidden underneath, and the upholstery for the seat pad is vintage leather.

The 195cc air-cooled parallel twin was stripped down, refurbished, and then polished up too. It's now running an electronic ignition system, rather than the original coil and points setup.

Performance gets an extra boost with much larger expansion chambers in the 2-into-2 stainless steel exhaust pipework. A pair of stubby canister-style mufflers keeps noise down ... a little.

Eagle eyes will spot the shock underneath the engine. This is a Honda Shadow VT600 monoshock, hooked up to the rear wheel with a discreet system of connecting rods.

The original RD 200 front suspension was somewhat basic, so Pedro and Filipe have installed forks from the Portuguese brand Tabor. That company is best known for its bicycle saddles today, but in the 70s and 80s, focused on aftermarket motorcycle suspension.

The headlight is the real old deal though, being a vintage Marchal. It's hooked up to an all-new modern wiring loom, which is a distinctly minimalist affair---there are no buttons or dials on the stainless steel bars. Just custom-made levers, and even a custom-made throttle.

The foot controls have been CNC-machined, and before the Yamaha was reassembled, all parts were given a refinish or clear-coat. Even the screws were restored.

The attention to detail (and skill level) is simply amazing, but best of all, the aesthetics are just as good. There's not a line out of place.

Most builders are great at getting the looks just right, but farm out the mechanical stuff. Or good at the mechanicals but never quite nail the style.

Kudos to Pedro and Filipe on giving us the best of both worlds. 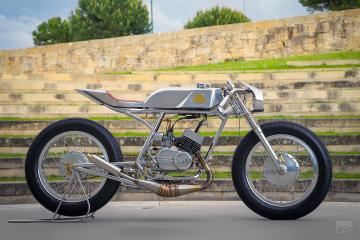