CB750 from Belgium, a vintage Ducati worth over half a million dollars, a Honda Dominator with geometric bodywork, and an Enfield GT650 from Tasmania. 1965 Ducati 125 cc four-cylinder Grand Prix racer

This glorious vintage machine is the only one of its kind in existence, and it's about to go under the hammer at Bonhams with an estimate of between £400,000 and £600,000. It was originally developed to race in the 125 GP class, but by the time it was finally complete, it was already outdated.

Fabio Taglioni, who'd been hired by Ducati in 1954 to oversee its racing and development programs, designed the 125 cc four. He's the guy that designed the iconic 100 Gran Sport, and pioneered Ducati's 'desmodromic' valve actuation system.

Development on the bike started somewhere in the late 50s or early 60s, but Ducati's financial woes (and subsequent withdrawal from racing) pushed development back. So when it was finally released, it was no longer cutting edge. It was tested, but never raced.

The prototype mysteriously ended up behind the Iron Curtain, in pieces. But somehow, famed motorcycle engineer and designer, Giancarlo Morbidelli, managed to track down the motor and frame---in two separate countries. Mr Morbidelli and his team reunited the motor and frame, and then painstakingly pieced the rest of the bike together using period correct parts and a custom-built fuel tank.

The bike now runs again, but spends its time on display, and rightly so. This is as special a slice of motorcycling history as you'll find. And it could be yours---provided you have extremely deep pockets. [ Via ]

Never Say Die, McFly Most custom motorcycles are built for customers, or get sold soon after they're complete. But some are too good to get rid of. We first featured this Honda CB750 cafe racer bitsa in a Bikes of the Week almost three years ago... but owner Antoine Hotermans is still holding onto it.

Based in Belgium, Antoine works under the nom de plume of McFly Custom. And since first building the CB, he's only really made one major change: he's taken the front fairing from a Yamaha FZ750, and added it to the Honda by way of custom-made brackets.

So why are we running it again? Firstly, because it's one of our favorite CB750s, ever. Antoine somehow managed to build a bike that looks scrappy, but also looks like it means business. He's used a CBR900RR front end and wheels, cams from a CBX750, and an exhaust system that blends custom headers from Workhorse Speedshop with a Yoshi muffler.

Secondly, because that one small change has elevated the whole bike. Partnered up with the Yamaha SR250 seat and the Cessna (yes, the plane) gas cap, the fairing finishes off the overall silhouette perfectly. Now, Antoine's CB750 looks more like a well-loved factory effort from the 90s than a custom bike. Here's hoping he never sells it. [ McFly Custom ]

Honda NX650 Dominator by Matteucci Garage Italian builder Marco Matteucci has quite an imagination. Just the other day we featured a sharp BMW K75 cafe racer he'd built, with a color scheme that was right out of the left field. Now we're taking a closer look at this: a Honda Dominator that's over-the-top geometric.

It sounds nuts, but it sort of works... right? The idea came to Marco while he was mocking up the Dominator's design on his computer. He laid down some guidelines, and then though to himself, "what if they were not guidelines, but the actual shape?"

Building geometric shapes meant a change in fabrication methods. Marco 'built' the bodywork out of cardboard first, then laser cut all the flat pieces from 3 mm thick aluminum sheeting, before welding everything together. Every last bit of the bodywork was built like this---from the headlight nacelle, all the way back to the compact panniers.

In the meantime, Marco's mechanic, Muzi Meccanica, installed a set of Marzocchi upside-down forks, and a Beringer brake system. He tore into the motor too, upgrading it with a Wiseco high-comp piston.

The paint looks almost gold, but it's actually a matte sand-colored finish. It's a nod to the Moroccan desert, and the bike's nickname: 'Dakhla,' which is a city in the Western Sahara. [ Matteucci Garage ]

Royal Enfield Continental GT 650 by Tasmanian Motorcycle Warehouse Royal Enfield have been making a point of getting their new 650 cc twins customized over the last while. Their latest initiative was the 'Busted Knuckles Build-Off'---a dealer build off which ran late last year in Australia. Tasmanian Motorcycle Warehouse decided to step up to the plate, and proceeded to knock their entry right out the park.

TMW's build team wanted to give the Continental GT "modern cafe racer/sports bike style, with sleek minimalist lines," while still keeping it usable as a daily runner. And that's exactly what we love about it.

Up top, you'll find a 1980s Kawasaki fuel tank, matched up to a custom-made tail section that houses all the electronic bits. The front fairing is off a Harley-Davidson Night Rod, and features a custom LED headlight. TMW also fitted clip-ons and rear sets, to nail the aggressive cafe racer ergonomics.

But this Enfield is more than just a dress-up job. It's also sporting the upside down forks and 17" front wheel from an undisclosed donor. And the rear's been converted from twin shocks to a mono-shock setup, with a 17" rear wheel too. TMW also ditched the airbox and built a stunning two-into-two exhaust system.

As for the final livery, the crew decided to keep it simple: black, with a hint of flake. Tasty. [ More ] 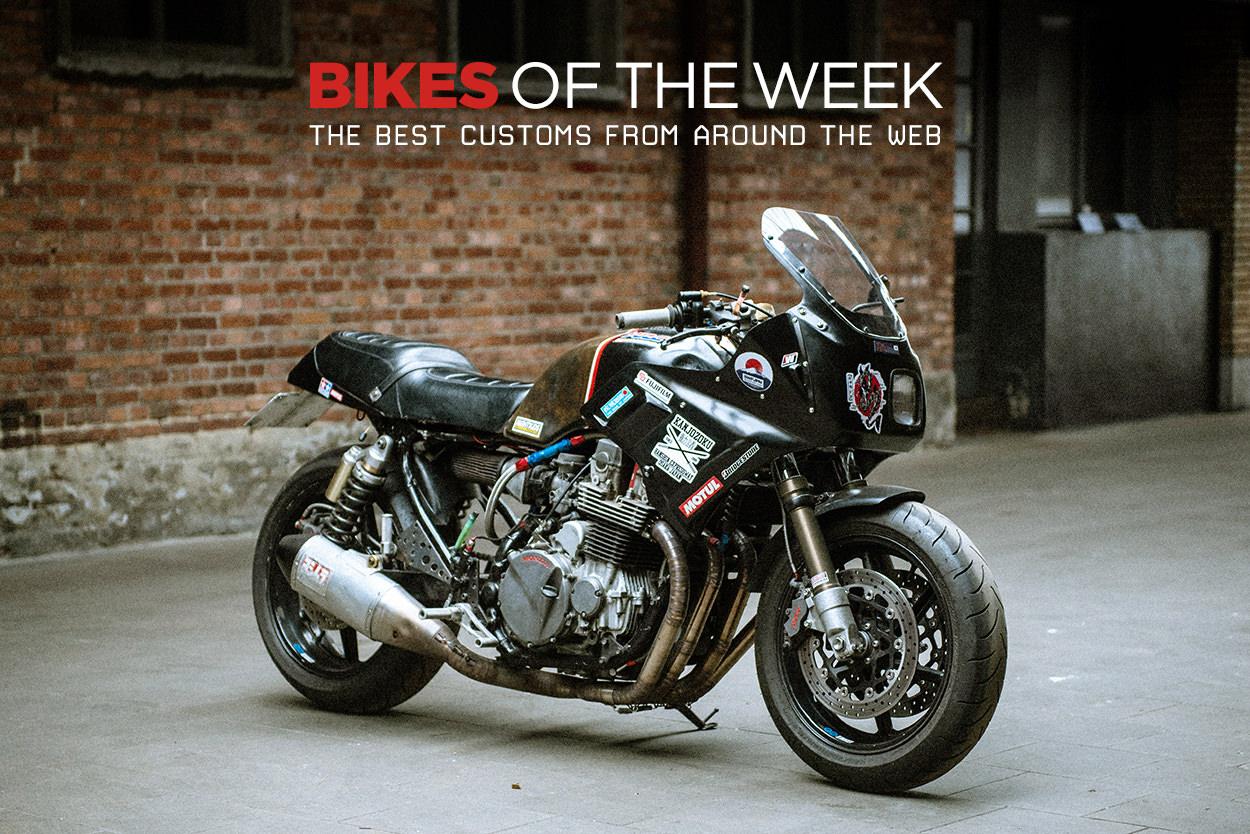