Basket Case Boxer: A BMW R90S converted into an enduro

bike is always a risk. There's the custom work to do, but there's also the arduous task of fixing all the parts that have inevitably worn down or rusted out over time. And there's no telling how extensive that restoration work will be, until you get your hands dirty.

This 1976 BMW R90S was in a seriously bad way when Ralf Eggl got his hands on it: its previous owner parked it in his shed 12 years ago when it stopped running, and didn't touch it ever again. To make matters worse, water had even gotten into the engine---and the pistons were rusted firm in the cylinders.

Ralf runs his one-man-show, Woidwerk, out of his workshop in Viechtach, a small town nestled in Bavaria's forests. He grew up around motorcycles, qualified as a master mechanic, and for the past few years has been kicking out 10 to 15 projects a year---most of them BMWs.

So if anyone's equipped to tackle a basket case boxer, it's him.

Ralf started by taking the bike apart, and painstakingly restoring it from the inside out. Some original parts were hard to track down---like a replacement set of OEM cylinders. And other parts were updated, like the new electronic ignition and alternator.

The aim was to get the R90S running like neu , but not necessarily looking like new. Ralf wanted to maintain a bit of a period feel, so he didn't polish the motor up too much.

If you look closely, you'll notice that most of the BMW's original frame is still intact too---including its elongated subframe.

But when it came to the overall style of the bike, there was no hint of keeping things original. "The aim was to build a classic, light enduro," Ralf tells us---a far cry from the R90's classic sport bike origins.

Ralf's customer pitched in by sourcing a new fuel tank for the build. He's from Switzerland, and managed to find a new old stock Condor A350 tank. (The Condor A350 was built in the 70s for use by Swiss armed forces.)

Ralf adapted the Condor tank to fit the Beemer, then matched it up to a vintage enduro-style solo seat. The fenders are hand-made, with a double bead added to the top of the rear to match the twin lines on top of the fuel tank.

Up front, he fabricated a fork cover designed to sit behind the headlight, attaching it with leather straps. All the metal parts on the bike were left bare, and then clear coated for protection.

Ralf was dead set on using as many BMW and classic parts as possible. So he installed a set of BMW R80G/S handlebars and mirrors, chunky Hella bar-end turn signals, and a classic Lucas taillight.

But he was equally passionate about modernizing a few bits, "because it's not a show bike, but one for riding," he says. So the front forks were upgraded with progressive springs, and the rear shocks replaced by a pair of YSS units.

The wheels are the stock items---restored, and fitted with Continental TKC80 rubber.

The bike was rewired too, with a Lithium iron phosphate battery tucked into a handmade battery box beneath the swing arm. The bike's switchgear is original, but the speedo is a small Motogadget mst vintage unit, custom-mounted just in front of the tank.

The brakes are mostly stock and restored, but the front's been converted from the original cable-actuated master cylinder under the tank, to a more modern bar-mounted setup, complete with stainless lines. Ralf also fabricated the high riding exhaust headers, terminating them in a pair of silencers from Hattech.

Short of the leatherwork and the clear coat on the bodywork, Ralph tackled everything in his workshop, by himself. He did a stellar job too, nailing every vintage cue, with just enough modernity to make sure this boxer runs strong.

It's just a pity he's shipped it off to Switzerland---because it'd be right at home on a fire trail in the Bavarian woods. 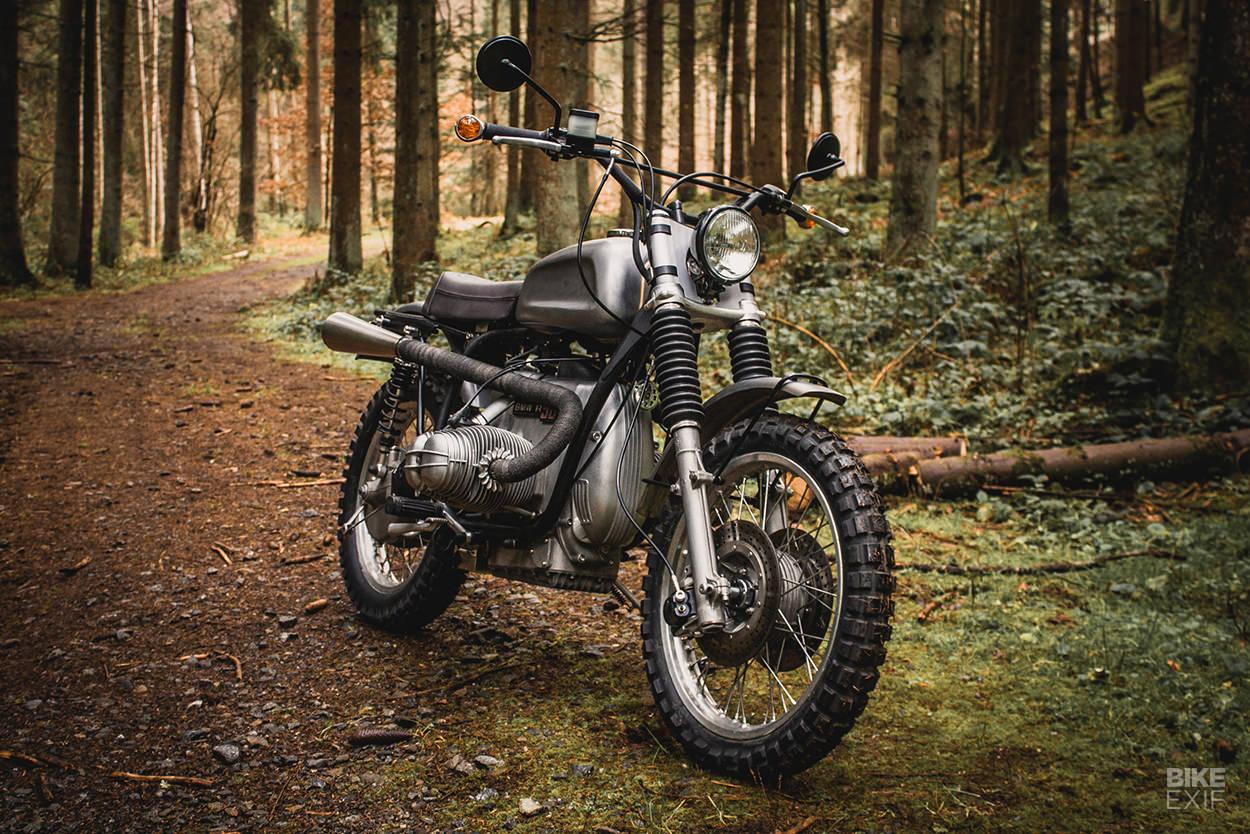