have a reputation for building edgy, well-finished BMW R-series boxers. But this latest project is a far cry from that simple and classic platform. This time around, the Dutch shop has torn into the most technologically complex boxer of all: a brand new R1250GS.

With a liquid-cooled motor, trick 'ShiftCam' tech and a veritable spaghetti of electronic wiring and wizardry, the R1250GS is light years ahead of its ancestors. And speaking from experience, it's a blast to ride too---with 134 hp and 143 Nm on tap.

Ironwood landed the commission via watchmaker TW Steel . IWC had previously built a Yamaha XSR700 for the 'Son of Time' custom initiative, and impressed enough to get the call for a second time. At the same time, BMW Motorrad Netherlands wanted to celebrate ten years of sales dominance in the Dutch market, so they came to the party too.

"We all had the same vision," explains Ironwood front man Arjan van den Boom. "To creating an extraordinary custom bike and matching timepiece, to align with BMW's 'decade of dominance'. We would craft the motorcycle while TW Steel developed the watch. The 'Dominator' was conceived!"

So how did Arjan and his team turn an overbuilt adventure bike into a razor sharp, futuristic roadster? It helped that neither BMW nor TW Steel put any parameters on the design. So Arjan's imagination ran wild.

"We thought, let's break the rules and envision the future from Ironwood's perspective," he says. "This build is from another planet, or the future if you will; DeLorean meets Tesla Cybertruck, Bladerunner versus Tron."

I've seen a modern BMW in the nude, and it's an impossibly complex machine. To figure out a way around that, Arjan and his head wrench Chiel started out with sketches, gradually forming the 1250's radical new lines. Then came the hard part: building it.

To translate their vision into metal, Ironwood pulled in friend, collaborator and craftsman, Marcel van der Stelt at The Custom Factory .

He not only built the angular body panels, but also helped with the tricky task of fabricating a new fuel cell and relocating the BMW's chunky fuel pump.

All the bodywork is custom---from the alien-like headlight nacelle to the layered side panels, and on to the waspish tail. There's a BMW S1000XR LED headlight up front, and an S1000RR taillight at the back. And the bike's stock TFT display is still there---it's just been relocated.

"Chiel and Marcel almost developed a bromance during their 100-plus hours shaping the aluminum bits and pieces together," Arjan quips.

The guys also built a stealthy twin exhaust system that snakes down and exits low on the right. They fabricated new intakes too, capping them off with custom-etched filters from DNA Performance .

The frenetic bodywork is matched to an impressive parts spec. Ironwood decided to keep the BMW's quirky Telelever suspension system up front, but swapped the fork tubes for a set of carbon fiber sleeves from CeraCarbon. Then they installed TFX Suspension shocks at both ends, lowering the front end in the process.

A set of 17" forged carbon wheels from Rotobox helped tweak the 1250's stance even further. Ironwood opted for their brand new 'Bullet' model, in sizes designed for the R 1250 RS---which meant a bump from 170 to 190 in the rear. They're now wrapped in Metzeler Racetec RR tires.

The brakes were upgraded with Brembo calipers from a R1250R. "This is something we tried to do in general," says Arjan, "keep it BMW OEM on replacement parts." To that end, the guys picked out a gorgeous set of BMW's machined 'Option 719' engine covers.

Ironwood also built a new subframe and rear-set brackets, fitting the latter with R nineT rear-sets. The CNC-machined top yoke is a custom piece, matched up to a set of clip-ons with Magura controls.

It's an outrageous design, matched by an even more radical livery---an anthracite base outlined with bright orange striping that changes according to the light. Jacco at Royal Kustom Works executed the paint, and the frame was powder coated to match. Ironwood picked blue as a contrast color, so the shock springs were redone accordingly.

There's some slick detailing going on up top though. Expert upholsterer Jeroen Bouwmeester at Silvermachine covered not only the seat, but also wrapped the grips and handled the 1250's new 'dash.' It sits on top of the tank, which also plays host to a custom watch case, adorned with a custom timepiece from TW Steel.

It's not easy to customize a motorcycle as complicated as the BMW R1250GS---especially when you're used to wrenching on older, simpler machines.

But Ironwood and co. have pulled out all the stops, delivering a truly remarkable machine in the process. 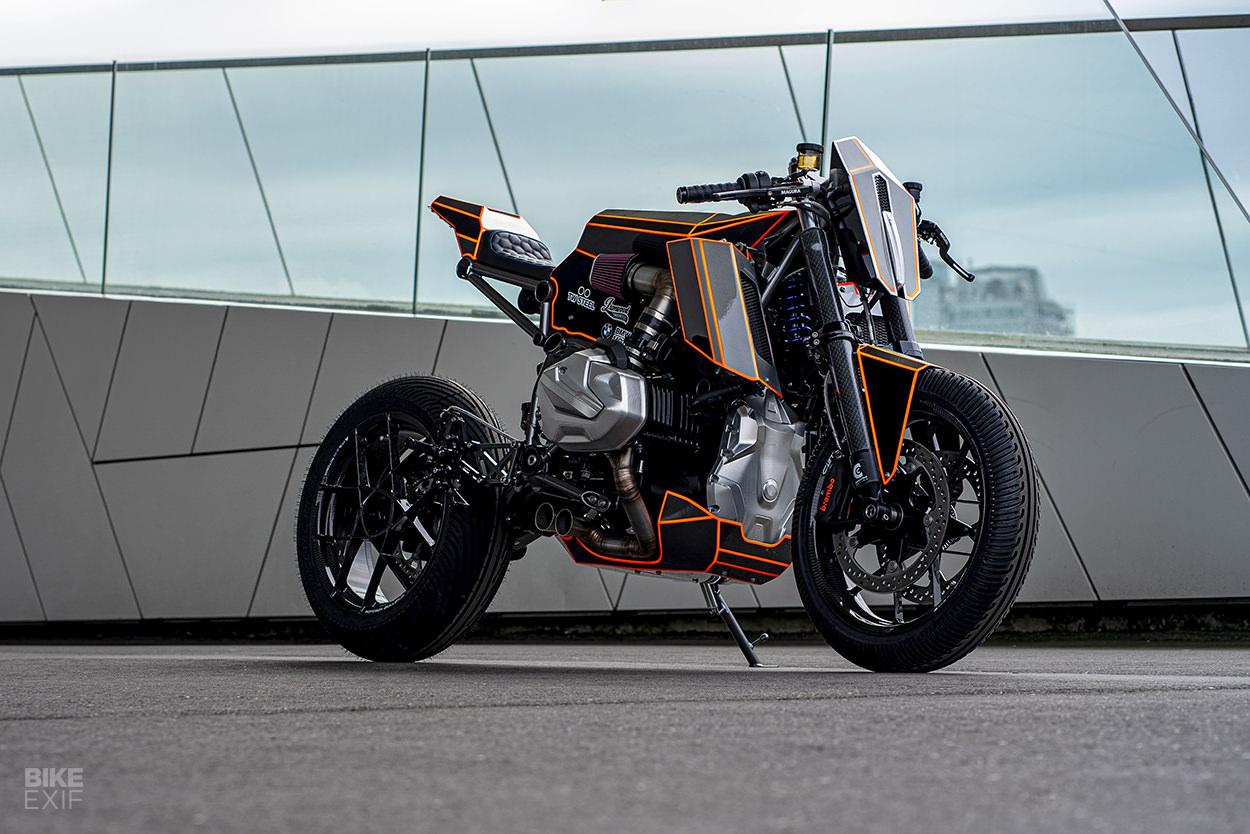