Nothing is Too Hard: A Triumph Trophy bobber from Spain

category of touring bikes that are short on sex appeal but long on character. One such machine is the Triumph Trophy 1200, which is like a two-wheeled version of the Mercedes W123 'Beirut Taxi': it's simple, reliable and well engineered, and can clock up an improbable mileage if looked after.

This heavily modified Trophy comes from TooHard Motor Co., a Spanish garage based just outside Madrid. For the past five years, shop owners Jose and Bea have been restoring and customizing older bikes, with the occasional foray into newer machinery---like this R nineT that we featured last year.

This Trophy 1200 is one of TooHard's most radical transformations, and aligns more closely with Triumph's current Bobber than the old sports tourer.

It's a 1998 model, which puts it in the middle of the long 1991-2004 production run. And at more than two decades old, this particular example was ready for a refresh.

The plasticky, jelly mold bodywork is all gone. Jose and Bea have adapted a modern Bonneville Bobber tank and solo seat to fit the frame, removing the rear subframe to allow the seat to 'float' behind the restored and repainted main frame.

The Trophy engine is silky smooth and with around 108 lazy horses on tap, allows the bike to cruise at 125 mph (200 kph) all day. So TooHard have simply freed up the breathing a little with K\&N Filters and a stubby one-off exhaust system from the Spanish company GR.

The heavy lifting is in the suspension. The front end is now from a Triumph Thruxton 1200R, with fully adjustable Showa 'big piston' USD forks and a 17-inch wheel with 140-section rubber. A Rizoma front fender helps protect the radiator.

At the back, there's a Nissin two-piston rear caliper matched to a Brembo 220mm rear disc, hooked up to a 17-inch Thruxton rim. The tires are American-made Dunlop American Elites, front and back.

It can't have been an easy mod, but TooHard have upgraded the rear suspension to a Daytona 675 swingarm, which is damped by a top-shelf Öhlins TTX36 monoshock.

The front brake and clutch master cylinders are now Brembo RCS units for even better control, and everything is plumbed in with new hoses.

The bars are an LSL 22mm fitment, plugged with Rizoma bar-end counterweights and fitted with an IMR throttle and Motogadget grips.

The kit is all good stuff, and well chosen too. But the most interesting thing here is that TooHard have effectively recreated the current Triumph Bobber, using a donor bike that has a similar sized engine but considerably more power---the current Bobber puts out around 77 hp, almost a third less than the mid-90s Trophy 1200.

Given that a decent Trophy 1200 can now be had for very little money---around $3,000 in the US---it all starts to make sense, even when you add on the cost of the upgraded parts.

Perfect if you love the Bobber style, but fancy a bit more grunt ... 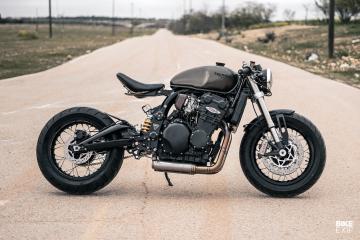