BMW K100 from Lithuania, a funky Honda Monkey from California, and a Harley-Davidson sidecar rig built in Poland---up for sale for a million dollars.

Honda Monkey Z50R Back in 1979, Honda realized people were actually racing their Honda Monkeys . So they released the Z50R---a sportier version of the Z50A with BMX-style bars, a new seat and a different fuel tank. This Z50R's been hopped up even more, and it sure looks like the most pint-sized fun you could have.

It belongs to California local Andres , who built it with his friend Eric from Row4 Design . They started with a rusted donor that had a hole in the frame, and set out to build the "meanest little Monkey in California."

The project started with a teardown and full resto of the frame, and quickly escalated to swapping the 50 cc motor out for a 190 cc Daytona engine. It's matched up to an Over Racing exhaust, held up by a custom-made bracket.

Up front is a set of upside-down forks, and out back you'll find a longer and wider swing-arm, hooked up to new shocks.

The wheels are two-piece 10" Takegawa items, finished in black chrome. The guys also trimmed the seat and had it recovered, and fitted a slightly bigger tank. The controls are a mix of modded Grom bits, Stage6 controls and a Koso headlight.

It sounds simple, but there were reportedly a multitude of hiccups and workarounds during the project. The end result is worth it though---this is one Monkey we'd love to ride in anger. [ More ]

BMW K100 by Two Wheels Empire There's a lot of potential lurking inside BMW's classic 'flying brick,' as long as you know how to unearth it. This K100 from Matas 'Matt' Rinkevičius, at Two Wheels Empire in Lithuania, follows a simple formula; stripped back, upgraded and murdered out.

All the bulky body parts are gone, save for the fuel tank. Matt built a custom subframe out back---and then capped it off with a tail and seat unit from his company's online store. The airbox was tossed, and the area under the seat was cleaned up to add more visual lightness.

Matt's upgraded the K100 running gear, too. It now sits on a set of Suzuki GSX-R forks, and an Öhlins rear shock, hooked up to the stock wheels. A set of Tokico calipers adds extra stopping power up front.

Finishing touches include a full rewire, some Motogadget bits, and a custom exhaust muffler plugged into the stock headers. This one had to be road legal in Germany, so it's also sporting fenders at both ends, and a license plate holder.

Topped off with matte black paint and monochrome roundels, the overall vibe is lean, aggressive and purposeful... and we dig it. [ More ]

Yamaha SR400 by 500King It's been a while since we've laid eyes on a decent Yamaha SR400 custom , and more's the pity. The SR-series remains one of the best custom donors around; timeless, elegant and delightfully straightforward. Yutaka Ohashi knows this well, since he arranges custom SR400 club meets in Japan's Shiga Prefecture.

This smart SR-based cafe racer is Ohashi-san's personal bike, and it's an absolute stunner. It took him about three and a half years to finish, too, but it was well worth the time spent.

The donor was a 2013-model, fuel injected 35th anniversary model that was soon bumped up to 505 cc by SR specialists Bike Studio Green Tea. It's also running a Green Tea oil cooler and hi-flow filter, and a new exhaust.

To match the power, Ohashi-san dropped a NAG racing 'Burrito' cartridge kit into the forks, and fitted Aragosta piggyback shocks out back. The wheels were rebuilt with Excel rims and billet aluminum hubs, and the brakes updated with TAROX calipers and ALTH rotors.

The Ducati-esque front cowl and carbon fiber fender came from bodywork experts, Chuck Box. The fuel tank is from Unosport, and the tail piece is from Motodog, with AAA Carbon side panels rounding out the set. A host of bolt-on bits and subtle custom touches tie it all together, capped off with a classy Gulf Racing livery.

This one's no show pony either---Ohashi-san had already racked up 30,000 km before the engine work even started! [ More ]

A $1M Custom Motorcycle The crew over at Bike-Urious have a knack for digging out obscure and interesting machinery, but this time they've outdone themselves. They've uncovered a Harley-Davidson sidecar rig, posted on eBay for a cool $1,000,000.

The bike is a Harley-Davidson Heritage, but all that's left of the donor is the 96" Twin Cam motor, and bits of the frame. Polish shop Game Over Cycles built everything else from the ground up, finishing the project in 2014. The sidecar followed in 2017, breaking cover at the famous Sturgis rally.

Depending on your perspective, the finished product is either a display of elite-level craftsmanship, or just plain gaudy. The seller claims that 3,000 hours went into the build, with an extra 2,500 hours into tattooing it.

Yes, you read right: both the bike and sidecar feature extensive leather paneling, all of which has been tattooed. Does that make it worth almost twelve times the price of an Arch KRGT-1 though? You decide. [ More ] 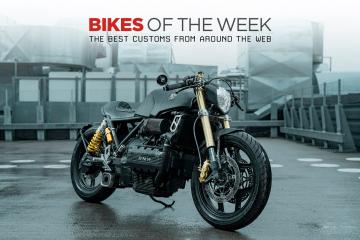