have mastered the art of building cafe racers. They nailed the formula when they broke onto the scene seven years ago---and have produced consistently good results since.

But the Polish shop likes to break the mold once in a while, by deviating from their hallmark genre. Because, as shop boss Sylwester puts it, "it just gives us a lot of fun and challenges."

This latest project is the furthest thing, stylistically, from a cafe racer you can get: a bobber . But clearly Sylwester and co. have that look down pat too, because there's not a line out of place on this low-slung hardtail.

The bike's based on an early 80s Yamaha XS650 Special. That was the slightly chopper-ized version of the XS650, and doesn't quite have the same classic appeal today.

"Building a bobber on an XS required a cheap base," says Sylwester. "We respect the heritage---it would be painful to cut down a nice XS II, for instance. So a Special seemed like a perfect choice."

Eastern Spirit is technically a solo project, but Sylwester is regularly helped by his brother, Kamil, and their friend, Lukasz. The crew started by stripping the XS650 down, lopping off the rear of the frame, and fabricating their own hardtail setup.

The floating seat is completely handmade too, and features a very elegant suspension system that uses a mountain bike shock. "It really is surprisingly comfortable," Sylwester assures us.

To perfect the Yamaha's stance, ESG tweaked the head angle with a set of custom-built offset yokes. They shortened the forks too, and re-valved them to be stiffer.

Next up, the wheels were swapped out for a set of solid aftermarket 16s, originally intended for the Harley-Davidson Fat Boy. Matched up to bulbous sawtooth treads, they created the exact profile Sylwester was after.

If the fuel tank looks sort of familiar, it's because it's a heavily modified Yamaha Virago unit. The headlight's been recycled too---it's off a Polish-made 1960s WSK, and also hosts the warning lights and ignition switch.

Other than the reverse levers, which are from an unnamed Russian motorcycle, just about everything else is custom. ESG fabricated their own clip-ons and rear-sets, and even built a new side stand.

There's a ton of hidden work at play too. Sylwester always works with older motorcycles, and that means their motors always get a proper nuts and bolts teardown. This one needed some new bearings, rings and seals, and an almost entirely new clutch.

On the outside, everything was done in black or gold-plated, with a few brass and polished silver touches. ESG also made up a pair of intakes, and built a svelte new exhaust system with hidden silencers.

There's a plethora of small details to take in, beyond the obvious brass bits. Drilled-out brake discs match the effect on the seat pan gussets and the foot control arms. And note how the rear turn signals are cleverly integrated with the frame.

The tank was painted in a classic gloss black, with a subtle double gold pin stripe adding just the right accent hit. Other than the ESG graphics on the wheels, there's no loud branding.

ESG's success with cafe racers has always been thanks to Sylwester's sharp eye, which gives him an uncanny ability to get a silhouette just right. He's done the same here, driving the point home further with perfect proportions and a moody color palette.

The result is a slick bobber that doesn't overtly scream for attention---but rewards it handsomely, once given. 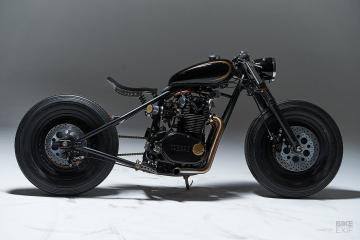