Yamaha GTS 1000 from Italy, a neo-retro Yamaha XT250 from Australia, and a very slick body kit for the BMW R nineT from France. Yamaha XT250 by Deus ex Machina

The Deus Swank rally is a light-hearted off-road event that combines "vintage motorcycles, fancy dress and a can-do attitude." So when Yamaha asked Deus Australia to build a bike that would embody the Swank spirit, head wrench Jeremy Tagand picked the XT250. After all, it might only be a small, air-cooled single---but it's capable and bulletproof too.

Jeremy swapped the XT's 21" front wheel for a 19" unit, and then wrapped both wheels in Dunlop K180 dirt track tires. The suspension was left alone, but the upper triple clamp was swapped out for a CNC-machined arrangement from Ricci Engineering, so that the crew could install Renthal fat bars.

For the bodywork, Deus shaped up a new flat tracker-style tailpiece, then trimmed the OEM side covers to fit with it. The tank covers are stock, but the front fender and classic square headlight are from Acerbis.

The only 'engine' mod is a new exhaust---a stainless steel header pipe, paired with an SC Project muffler. Sydney Custom Spray Painting handled the paint, which mimics the original colors, with a few tasteful changes. The 'Xtreme 250' looks cute, capable, and the perfect blueprint for Yamaha to design a 250 cc neo-retro dirt bike with. [ More ]

Yamaha GTS 1000 by FMW Motorcycles Italy is facing hard times right now, so it's appropriate that this eclectic Yamaha GTS 1000 is named 'Italian Resilience.' The name holds real significance for FMW Motorcycles builder, Lorenzo Fugaroli, too. That's because had to temporarily close up shop, and ended up finishing the project at home.

With a single-sided swing arm system up front, the GTS 1000 is a pretty wild bike already. But here, Lorenzo's cranked it up to eleven. Taking cues from Roel Scheffers' GTS 1000 (with permission from Roel himself), Lorenzo's redesigned the rear end to match the front.

Like Roel, FMV have installed a Honda VFR swing arm and rear wheel, operating with a Buell shock. There's a new wheel up front too; a mash up of a VFR wheel, with bits lifted from a Honda NSR 180 SP. The front end was upgraded with a Yamaha R6 shock.

Then there's the most obvious change---all the new bodywork, which was all hand-shaped from aluminum.

Lorenzo also swapped the fuel injection for carbs, and added a custom exhaust system. With some fettling, this GTS now makes 130 hp.

But it's the details that push this one over the top---like the integrated Daytona speedo, or the cutout in the tank for the custom velocity stacks. Forza Italia! [ Via ]

BMW R nineT by Viba Just a short while ago, 3D printing was still a very new, and very niche, technology. But now it's gradually permeating the custom scene and, frankly, it's a game-changer.

This BMW R nineT from Viba in France relies heavily on 3D printing tech. The build is mostly just a set of new bolt-on pieces for the neo-retro boxer, but they do a good job of tightening it up for a more aggressive look. Viba handled all the design on the project, but turned to Erpro Group for manufacturing.

One of the most intricate parts is the new handlebar arrangement. It's a one-piece setup printed in aluminum, which tapers to accept the stock controls. It also integrates the bike's OEM speedo, which is now covered by a custom-etched glass pane. Just in front, a new nacelle flows around an LED headlight.

Other custom bits include a pair of frontal side panels (printed in a glass bead-reinforced polyamide), and the tail section (made with a bi-injected silicon). Plus Viba have designed a new front fender, fork covers, and a new exhaust system.

Everything is plug-and-play on the R nineT plaform. Viba will build you one if you like, but they're limiting their numbers to 23. As an added bonus, some of the parts leave room for custom etched graphics, too. [ Viba ]

Yamaha SR500 by Dubstyle Designs Years before he built the sweet KTM street tracker we featured the other day, Garett Wilson threw this SR500 together in his buddy's garage. And since it's only really made its way online now, we figured it'd be good to take a closer look.

Visually, there's nothing wacky going on here. Garret stuck to quintessential flat track cues, with a DT400 tank up front and a Knight-style fiberglass tail section out back. The wheels are 18 inches at both ends, and they wear dual-sport tires rather than dedicated flat track treads.

Garret lowered the front suspension, stiffened it up, and added a pair of Öhlins rear shocks. He also installed an aluminum swing arm and new triples. On the performance side, the street tracker now runs a 36 mm flatslide carb from Mikuni, and a Hoos header with a modified Akrapovič muffler.

Other upgrades include a Magura hydraulic clutch, Renthal bars, risers and grips, and the Brembo front brake from a Ducati. And then there's that expert paint job, laid down by Dan White---who also convinced Garret to let him paint the graphics by hand, rather than use decals.

Fun fact: that's the same gold on the bodywork and wheels, except one's finished with a metalflake, and the other is matte. [ More ] 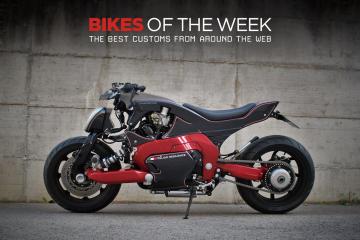