A KTM 450 flat tracker built for a Dakar Rally racer

custom builder, one of the most difficult briefs is for a race bike. No matter the genre or discipline of the project, the purpose-built, stripped-down nature of race machinery leaves minimal room for aesthetic creativity.

After all, these bikes are not built to look pretty. They're built to run a distance in the quickest time possible. So form takes a backseat to function, and each component needs finely tuned design.

When Pierre Dhers of Freeride Motos Racing was offered a commission to build a 450cc single with vintage flair for a flat track race series, the he knew he had his work cut out for him.

But he was undeterred---because he's spent the better part of the last decade single-handedly operating a successful full-service motorcycle and race shop under the Freeride banner.

The commission was from seasoned Dakar Rally driver, Pierre Lachaume, who has decided to shake things up for 2020 and try his luck on two-wheels in France's Flat Track Championship.

The pair of Pierres decided the tracker would be based on a KTM 450 SX-F, so a clean 2013 specimen was sourced and the project began. The first order of business would be getting the mechanical and performance aspects of the build in order. With the donor torn down to a rolling chassis, Dhers called on Sébastien at Off Road Development to lower and tune the 450's suspension, in preparation for a full season of going fast and left.

The KTM now rides on a set of flat track-appropriate 19" wheels front and aft, with black Excel rims laced to black Talon hubs with bare spokes and nipples.

In place of the stock exhaust is a full-custom setup. Dhers hand-bent a single-piece Inox head and mid-pipe which routes to a low-slung aftermarket can. It's been stripped of its factory branding and decorated with a 'Freeride Motos Racing' badge.

"I manufactured the exhaust pipe from 1mm stainless steel and the silencer is from MIVV," says Dhers. "It allows the bike to pass the technical inspection requirements of 112db for the races."

What sets the KTM apart from the rest of the singles in the paddock is its complete set of custom bodywork. Pierre crafted the shapes in fiberglass, which he used to make the molds. He used these to generate the front number board, the tank cover/grilles, and the tail section, complete with its integrated square number boards---also made in fiberglass.

Unlike the custom bodywork on his earlier builds, the fiberglass pieces on this SX-F were designed to be produced as a kit. Dhers has gone to great lengths to ensure that mounting the kit is easy and hassle-free, with each piece bolting directly onto stock mounting points or brackets.

"What's great about this kit is that it can be installed without any modifications to the chassis. The design also allows the bike to retain its stock tank and its fuel-pump, as well as the original airbox and even the stock saddle. We can transform a bike in just a few hours," says Dhers.

Once the KTM was fully built up, Dhers began prepping it for paint. The two Pierres opted to go with a baby blue scheme that evokes the livery from vintage KTM models before the more recent, orange-clad era of the Ready To Race brand.

"The paint was inspired by KTMs from 1974. The livery was designed by Pierre Lachaume, and entrusted to Rémi from the Art Scratch workshop. There are no stickers or decals here," says a proud Dhers.

The new high-volume radiator was treated to a set of custom CNC-machined aluminum covers. There's also a new pair of fork guards, hit with the same gloss baby blue paint as the rest of the bodywork, and emblazoned with playful scripts on either side: the left reads "NO FRONT BRAKE," and the right simply says "TURN LEFT."

Other nods to scoots of yesteryear include a custom aluminum fuel cap machined up by Dhers' father, and a leather saddle that combines classic MX characteristics with thoroughly modern traits. "The seat is another element that reinforces the vintage theme. It was made in full grain leather by the very talented craftsman, Christophe Cannac from the AKOTABE workshop," says Dehrs.

While the bike was being painted, Dhers pulled everything apart one last time, to repaint or polish every nook and cranny on the tracker. "I also completely overhauled both the engine and running gear," he tells us (and we're glad to hear).

It must have been intimidating to build a competition machine for a seasoned Dakar vet, but Lachaume couldn't be happier with the end result. He's got a highly competent 450cc single short tracker racer with a healthy dose of vintage nods and aesthetic traits.

The only thing left to do is to attack those European short tracks... 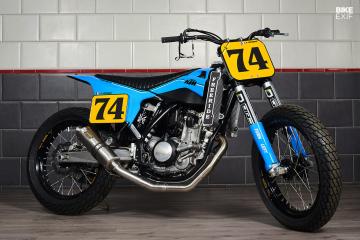