regular Joes who keep the grinder sparks flying in custom workshops. A small but generous group of brands are also happy to commission bikes---because they're a darn sight more interesting than most promotional vehicles or stunts.

The German sportswear label and retailer BSTN is one of those farsighted brands, and this is the second custom they've commissioned from Philipp Wulk of Impuls .

The base vehicle is a Sur-Ron Firefly: a popular and surprisingly powerful little scoot that sits halfway between an electric bicycle and electric motorcycle.

Also known as the Light Bee, it has a top speed of 73 kph (45 mph) and a real-world range of around 70 kilometers (43 miles). The build quality is exceptional---reportedly better than that of most motorcycle makers, and approaching Honda levels, according to some testers .

Impuls have worked with BSTN before, creating a striking Ducati 916 to celebrate the Air Jordan sneaker. This time, the custom project is tied into Nike's 'Air Max Day.'

"After our last collaboration with the Ducati 916, BSTN wanted to build a bike to match the Nike Air Max 90 Duck Camo and Max 2090," Philipp says. "The general theme was 'sustainability,' so to go electric was the obvious choice."

"We did some research and decided to go for the Sur-Ron Firefly: it is street legal, and you can ride it with a regular car license. We tried one out and really liked the punch and general look it had. It's neither bicycle nor motorcycle, and we liked that. BSTN also wanted to raffle one off, and it made sense to not limit the audience to the motorcycle community."

After testing the Sur-Ron with the 1.90 meter-plus (6'2") guys at BSTN, Philipp decided not to change the stance or the suspension. "Both were just fine. We just had to change the stem to make the bike more suitable for taller riders."

If there's a weakness with the Sur-ron Firefly, it's the detail of the styling. "The part right behind the handlebars and in front of the seat looks odd, as if something is missing," says Philipp. "I don't like to have stuff in my pants when I ride, so we built a luggage rack in front of the seat."

That meant reinforcing the battery cover, and contracting expert leather specialist Kruno Nakic to design the luggage itself.

At the rear, the frame is reworked with a new license plate mount, and a Supernova M99 taillight with custom laser cut acrylic screens.

The wheels have been re-spoked with black spokes, and there's an aftermarket black sprocket to match new black powder coat elsewhere.

Philipp has upgraded the stock brakes to Magura's four-piston MT5 eSTOP units for better feel. The original headlight also had to go, and has made way for a sleek Supernova M99 Pure+ unit. It's fitted with a MonkeyLink adapter, so it can be taken off easily for off-road use.

The seat has been rebuilt by Kruno Nakic, who trimmed off the front and sides, and the battery cover was raised to enhance the silhouette of the bike. "It might seem like a minor detail, but it helps the looks a lot."

Kruno wrapped the grips in leather, too to match the color of the bag ... and the tire warmers. "Those were obviously absolutely necessary to get the tires to the right temperature before the daily race on the trails!"

The biggest issue Impuls had to deal with was not on the Sur-Ron itself. "It was the lockdown due to the Coronavirus," Philipp says. Like all the German workshops, Philipp had to prepare for rapidly impending quarantine.

"Some parts didn't arrive in time, but fortunately the headlight arrived on the day of the photo shoot and we were able to work around the missing parts and get the bike ready before the final lockdown."

"After I bought the last can of paint, the shop closed down. The last parts arrived via express courier on Saturday morning. Crazy times!"

Let's hope there are plenty more fun bikes like this to enjoy in the coming weeks---and kudos to the companies that are prepared put the dollars into commissioning them. 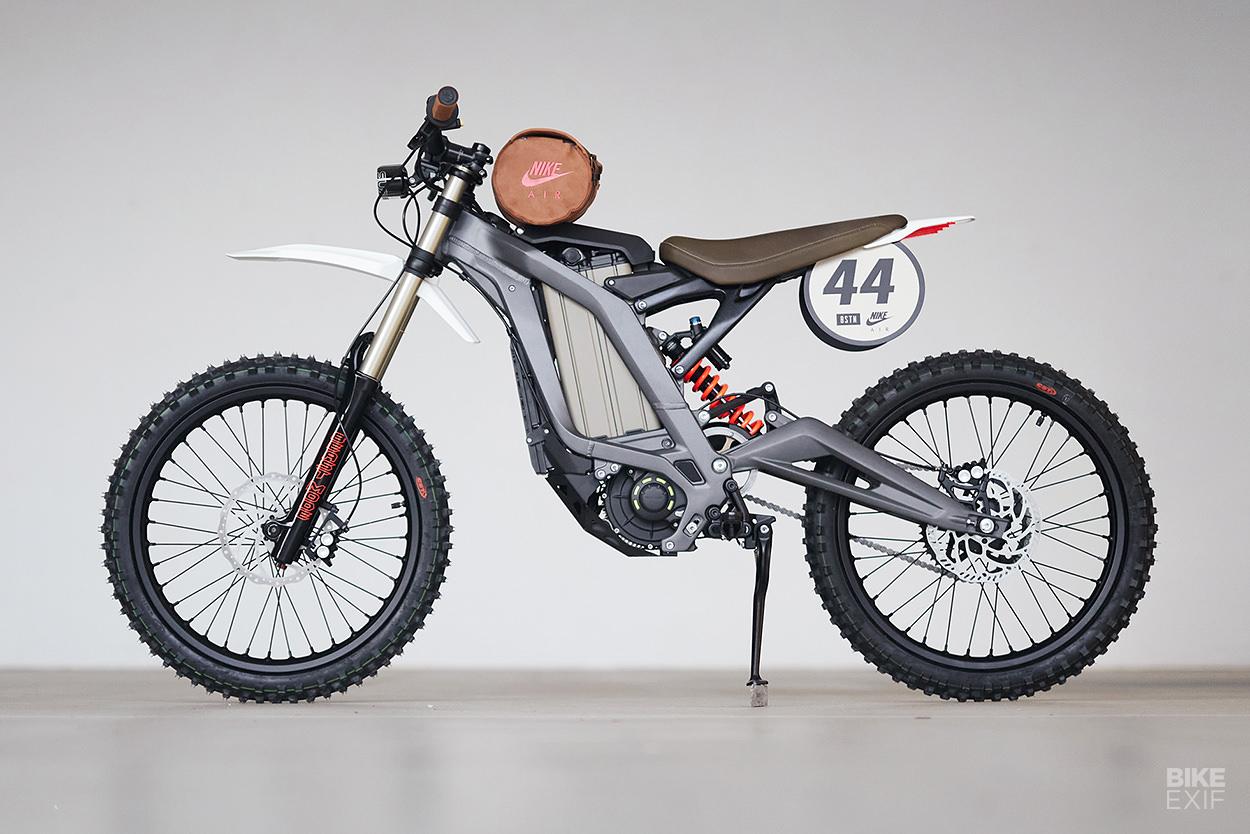