A subtle but brilliant Kawasaki Z1 from AC Sanctuary, a wild supercharged Triumph Bobber from England, and a sneak peek at the new, 80s-style Honda CB-F concept.

RCM-507: A new AC Sanctuary Z1 Every time we feel like we need a 'reset' of sorts, we check in on AC Sanctuary . Their builds are timeless, classy and impeccably constructed---like a new album from Arcade Fire, you know exactly what you're going to get, but you also know it's going to be good.

This Z1 sticks to the formula. It's more visually subdued than most of the builds from the Japanese workshop, but we like it that way. Every part has been stripped back to the metal and either upgraded, replaced or refinished.

The forks are top-shelf Öhlins, the wheels are OZ Racing, and the blueprinted 930cc engine breathes through Mikuni TMR38 carbs. Nitro Racing parts are everywhere; from the foot controls to the cooling system to the full titanium exhaust system.

If you're used to riding modern bikes, older variants often disappoint---as anyone who has ridden the old and new Katanas will realize. But we're betting this Z1 can hold its own with any sporty modern roadster, and will probably hold its value better too. [ AC Sanctuary RCM-507 ]

Supercharged Triumph Bobber Jody Millhouse of Thornton Hundred Motorcycles in England is a bit of a power freak. We covered his ballistic, tuned Ducati Panigale 1299 an earlier edition of BOTW , and he's now back with an even more extreme machine---a Triumph Bobber with forced induction.

There are LED lights all round, one-off CNC'd billet hubs, and black spokes connected to gloss black Excel rims. He's given the Bobber a stainless pie-cut and TIG-welded x-pipe exhaust system, but the highlight is obviously the TTS Performance supercharger. With 12 psi of boost, it lifts the Bobber to 110 rear wheel horsepower---and is closely related to the setup used by Carl Fogarty on the official Triumph Thruxton Glemseck sprint Thruxton.

What sort of person would commission such a wild conversion? None other than Rick Steele, the American entrepreneur, philanthropist and NASCAR enthusiast---hence the race car-inspired detailing. [ Thornton Hundred Motorcycles ]

Honda CB-F Concept There are no big motor shows in Japan this year, so Honda is pushing out its new releases and concepts online . The first cab off the rank is this very tasty CB-F concept, which is based on the CB1000R---a somewhat long-in-the-tooth (but still very enjoyable) classic naked.

The CB1000R styling is too plasticky for our tastes, but it looks like Honda has got the 'neo retro' look sorted with this rendition. It's said to be inspired by the CB900F of four decades ago, and it's clean without being bland.

There's no word on whether or not the CB-F will go into production, and all we have to work on are the two images shown here. But the underlying engineering has probably paid for itself several times over, which makes us cautiously optimistic. This roadster would be a good foil for 80s fans who aren't sold on the Suzuki Katana or Kawasaki Z900RS . [ Via ]

Honda CBX750 by AMP Motorcycles Not all 80s Japanese bikes were great. The CBX750 was Honda's attempt to follow-up the iconic CB750 , but fell well short of the mark---despite the strong engine and the Pro-Link rear suspension.

The squared-off styling was probably the main culprit, since it didn't appeal to fans of the curvy CB750 or those looking for something more contemporary.

The German father-and-son team at AMP Motorcycles have done a wonderful job on this 1986 CBX though, which shows the big inline-4 in a flattering new light. They've thoroughly overhauled the mechanicals, electrics and brakes without removing the biggest visual cues: the rear shock gets a Wilbers upgrade and the F16/R18 wheels are refinished. They're now shod with Metzeler Lasertec rubber.

The biggest change is at the back, with the lumpy stock setup swapped out for a minimal, waspish subframe and vestigal tail unit. The look is hunched-forward, accentuated by a blacked-out screen and matching stripes over deep red paint. It shouldn't work, but somehow it does, proving that occasionally you can make a silk purse out of a sow's ear. [ More ] 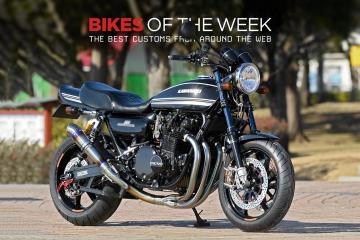