Deschenes is not a pro custom motorcycle builder: from Monday to Friday, she's a hospice nurse in the suburbs of Minneapolis. But on the weekends she's a flat track racer---and a fierce one, too.

In just her second year of racing, Jillian's already the number one plate holder in the women's class in her AMA District. Her success piqued the interest of Royal Enfield, who invited her to test out their Himalayan-based flat tracker---the FT411.

Jillian's affable nature left such a mark on the team, they earmarked her for future projects.

One of those projects was ' Build. Train. Race. '---a grassroots female-focused flat track program. Royal Enfield picked four North American women motorcycle enthusiasts, and hooked them up with a new Royal Enfield Interceptor 650 each---to transform into a race bike and ultimately take to the tracks.

Despite having no bike building experience, Jillian made the cut. In no time, she had a brand new Interceptor 650 in her garage---but she also had a three-month deadline, and an eight-year-old daughter and full-time job to juggle.

Through hard work and a significant lack of sleep, she delivered a flat tracker that looks like it rolled out of a pro shop.

Jillian had a pretty solid team supporting her, too. Her father Jim Deschenes owns Superior Tool Grinding, and helped to machine a number of custom parts. And she roped in her fiancé and fellow racer, Erik Moldenhauer.

What makes this a killer build is how Jillian's nailed that classic flat tracker silhouette, and a lot of that is thanks to the bodywork. There's a modern Harley-Davidson XR750 tank cover from Gopher Glass up front, and a Saddlemen tail section out back, trimmed to fit the Enfield frame. The frame was cut-and-shut to match the length of the new tail piece too.

Fuel now sits under the seat, in a one-gallon fuel cell from Boyd Welding with a modified flange for the OEM pump, installed with help from Retrodyne. Peek under the tank cover, and you'll find a lightweight Lithium-ion battery from Antigravity.

Moving to suspension, Jillian swapped the Interceptor's front end for a set of Yamaha R6 forks, with Race Tech Gold valves. They're held in place by a pair of modified R6 bottom yokes. The rear shocks are stock, but they've been re-sprung and re-valved.

Getting everything to fit required a plethora of custom parts. So Dad Jim machined up a new 20 mm axle for the front, a set of wheel spacers for both ends, and a custom brake caliper mount at the back. There's also a custom-made quick-change brake rotor adaptor for the 10 1.2" rotor.

The cockpit is delightfully minimal; a set of wide tapered flat track bars, with a Motion Pro throttle housing and run/start switch. The ignition switch has been replaced with a simple 'on/off' toggle switch too.

There's nothing wild going on with the motor here, just an air box removal with a pair of K\&N pod filters taking its place. Fellow American Midwesterners S\&S Cycle came to the party too, with a stunning two-into-one exhaust system that's sure to unleash a little more grunt.

Jillian kept her new race bike's livery simple and extremely classy. The execution is robust too, with vinyls laid over a base of auto paint, and then clear coated. The race plates are actually clear acrylic, with vinyls stuck to the inside.

Jillian hit her deadline, and in the process delivered not only a hella neat flat racker, but also a great example of the Interceptor's potential.

Unfortunately racing in the US is currently on hold, so she hasn't had a chance to fire it up in anger yet. But we're just as eager as she is to see it out on the track. 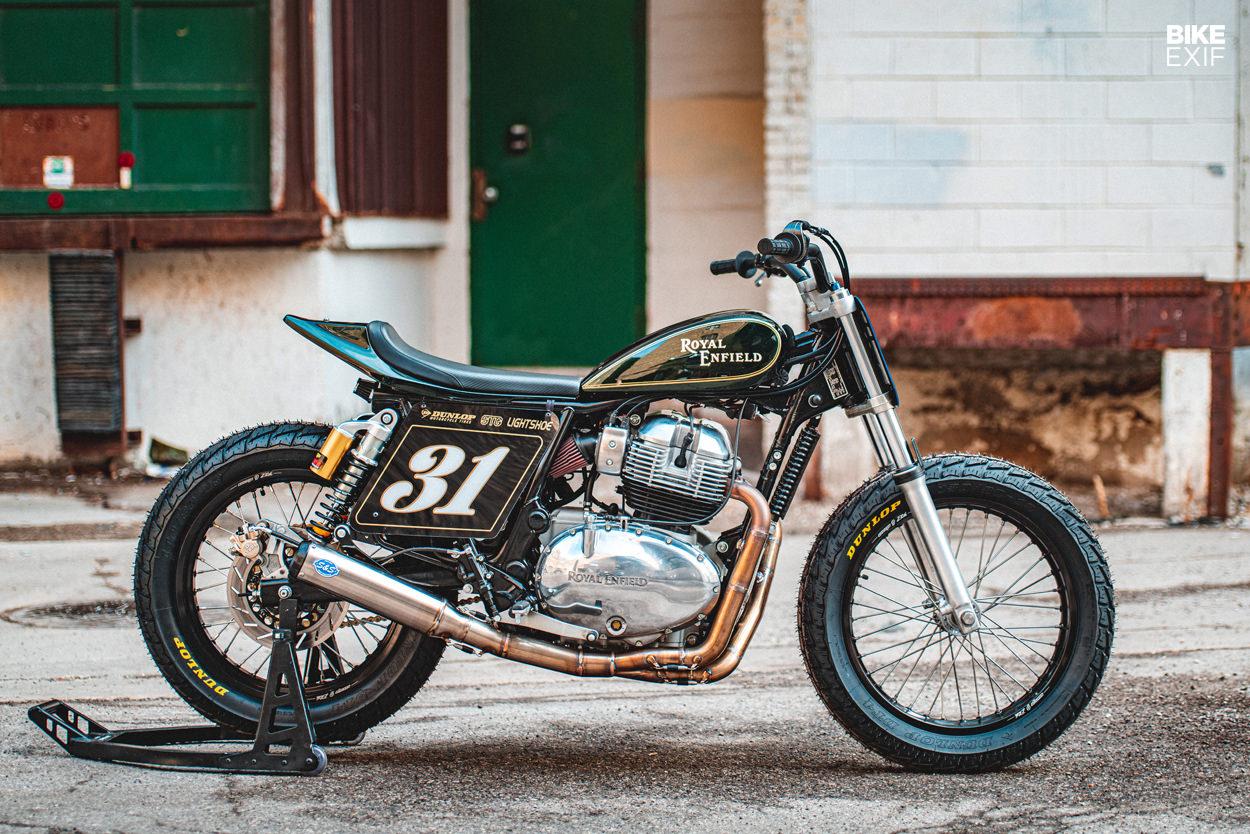