A wild new Vyrus superbike from Italy, a Honda XR600 built for a Spanish Dakar racer, and a stylish collection of custom motorcycle coloring pages from the British artist Ian Galvin.

Honda XR600 by Oscura Motorcycles Spanish off-road racer Joan Barreda Bort is a Dakar veteran who knows how to go quick off-piste: he races a state-of-the-art Honda CRF 450 Rally. But for his personal ride he's picked something a little more stripped down.

Joan approached Oscura Motorcycles with a few requirements: it had to be a dirt bike, it had to be a Honda, and it had to be light and powerful. Oscura picked a machine that's had racing success in its own time---the mighty XR600 that dominated the Baja 1000 for many years.

They've turned the XR from a 90s desert racer into a compact scrambler, with a few tasty mods in the mix. The tank was brought in from the UK, but the Alcantara seat and the subframe are custom. Oscura also fitted upside-down forks, and dropped the front wheel size.

The exhaust mufflers are from Termignoni, and are the same as those on Joan's race bike. They're attached to a set of custom headers. Other parts include new bars, bar end mirrors and a round headlight, and the bike's been rewired too.

To our eye it looks like the perfect town and country scrambler , and it clearly handles well too---as demonstrated by Mr Barreda himself. [ More ]

Vyrus Alyen It's an odd time for a brand called ' Vyrus ' to be releasing anything. But at least we can count on this boutique Italian company for one thing: their bikes are always wild. And the Alyen is probably the wildest yet.

The Alyen is a hub-centered steering oddity powered by a 1,285 cc version of Ducati's short-stroke Superquadro motor. That's the V-twin mill you'll find in the Ducati 1199 Panigale, and it's good for a hair over 200 hp. Here's, it's crammed into a magnesium frame, and surrounded by bodywork that looks to be mostly carbon fiber.

Vyrus have spec'd the Alyen with uber-desirable carbon fiber wheels from Rotobox, and Brembo GP4-series brakes. They haven't listed what suspension components they're running in their proprietary setup, but our friends at Asphalt \& Rubber have speculated Öhlins.

As for the styling, it's exactly as crazy as you'd expect from Vyrus. We're seeing a KTM-esque LED headlight, hand guards with integrated turn signals, and sharp set of tail panels that are actually part of the exhaust system. We're not sure if it's mechanical art or just plain OTT, but it should be plenty fun to ride though. [ More ]

Triumph T140 by Ton Everaers Ton knows a few things about vintage Triumphs. He races a 1969 T150 in Europe, does the design for a Dutch Triumph owners club magazine, and works on classic bikes. He has a workshop called KRUK Custom , but this smart 1979 T140E scrambler was a personal project.

Ton had the idea to build a desert sled for a while, so when a T140 popped up for sale nearby, he jumped. The bike came with a TR7 Tiger head and a single Amal Concentric 930 carb already installed, and started first kick... but there were issues with the transmission. And it needed serious love elsewhere, like the brakes, shocks, clutch and electrics.

Most of the parts Ton used to bring the T140 up to spec came from his own stash. He kept the original Koni shocks, but sent them to a specialist for a proper rebuilt. The exhaust system was pieced together using off-the-shelf headers, and T150 mufflers modified with reverse cone ends.

Ton made the heat shield himself, along with the new seat pan and a host of brackets and trimmings. The lid on the air filter is a paint can, cut to size, inspired by a photo of an old desert sled that Ton was using as inspiration. Bits like the handlebars, mudguards and random service parts were all ordered online.

Triumph desert sleds will never go out of style, and this is a great example of the breed. [ More ]

Sydney-based Sam Troy did a knockout job with this GB400 TT though. The donor was in a bad way too: it had survived a number of falls, been left outside, and there had been some dodgy wiring work done.

Since this was Sam's first build, he decided to tackle the job in chunks. First he got it running, then he sorted out the electrics for good. Then he handed the motor to Trev at Surfside Motorcycle Garage for a top end rebuild. Trev also tuned it to run with the Cone Engineering cans and XBR500 Blackwidow headers that Sam picked, and re-laced the wheels with spokes that weren't rusted.

Sam rode it for a while before edging it towards the bike we see now. That included installing a Airtech Streamlining AJM7 fairing with a Gustafsson screen, and fitting lower bars and rear sets. Colourfuel handled the sublime paint job, adding a final classy touch to an already stylish cafe racer. [ More ]

The collection includes nine illustrations of various custom bikes built by Untitled Motorcycles' London and San Francisco branches---including their BMW R nineT, a Moto Guzzi, a KTM, and a couple of Triumph Thruxtons.

Acclaimed illustrator and artist Ian Galvin created the illustrations, and each one is 5000 by 3000 pixels in size, making them more than good enough to print out at home. Whether you're looking for something fresh for your kids to color in at home, or your own boredom's reached new heights, these should provide plenty of entertainment. 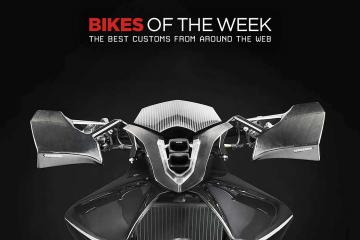