Cool Kat: ICON channels the 80s with a custom Katana

the ICON crew gets fresh meat. "Our usual meals consist of antiquated metal, served with a healthy dose of aged mechanicals," says Kurt Walter, design director for the Portland outfit.

Not that he's complaining: his crew have served up some monster hits in the past, using the most unlikely material. But ' Brand New Jack ' is different: it's based on a current spec, 2020-model Katana dropped off by Suzuki USA.

Of course, there was a catch. "When Suzuki asked us to cut into a virgin Katana, we were like, 'Hell Yeah!' But then Suzuki told us it had to be fully built in 30 days..." Typically an ICON custom bike is cooked on low over a 12-18 month period. To fully bake a custom in 30 days was going to be a significant challenge.

Like any build, it started with the concept. In this case, an affinity for Gobots, Gundam, and the tight cybergirls of Robotech was pulled from ICON's pubescent id and slung face-first at the Kat.

"Most of it stuck, and what didn't was quickly cleaned up with a damp mop," says Kurt. "The Katana, then and now, has always been a starship. Our goal was to up the uber-mechanized facade of the new Katana into full transformer. Let's face it, who doesn't want their literbike to evolve into a flying robot lion at the touch of a button?"

The new Katana has the specs to succeed, not least because it's sporting a 150 horsepower engine and is basically a riff on the very accomplished GSX-R1000. But the styling has drawn mixed emotions: some folks love it, whereas others feel like it's in a slightly awkward no man's land.

The original Hans Muth -designed GSXS1100 Katana is one of the most iconic 1980s bikes, so Kurt and his crew decided to channel the 80s on the aesthetics by tweaking the bodywork and using punchy neon colors---but balancing that with serious performance upgrades.

Brand New Jack sports the several hallmarks of past ICON builds, including a penchant for multiple fueling options via twin endurance-style fuel ports.

"Typically this involves lots of cutting and grinding and praying the tank doesn't explode in the process," says Kurt wryly. "The good news on the Katana is that the tank cover is plastic, so any explosions were kept below deck and invisible to the naked eye!"

No ICON bike leaves the garage without a premium suspension upgrade. "Nitron delivers our preferred bouncy bits," says Kurt, "with a remote piggyback shock, and a cartridge kit for the grafted-on 43 mm USD forks" (which come from a 2017 Kawasaki Ninja ZX-10).

When it came to the rotational aspects of Brand New Jack, the crew went deep into their stash of parts and salvaged a set of forged 17-inch Galespeed wheels imported from Japan. The solid rotors are custom units made by EBC specifically for this application.

"The 'look ma', no holes' design isn't a performance upgrade, but rather just something we do because we can," says Kurt. Completing the circle are Avon's top-shelf 3D Ultra Sport tires.

The exhaust system was trickier. Leo Vince sent through a batch of different potential setups, which were cut and spliced into the underbelly of the Kat. "If memory serves me right, most of a Yamaha MT-07 unit made the cut," says Kurt.

"You'll also notice the complete lack of a cat on the Kat. The irony wasn't lost on us, but at least 25 pounds was."

The new bars come from Driven Racing, and keen eyes will spot a lightweight Magura Hymec hydraulic clutch and a Magura HC3 brake master cylinder. ("Word is that it's space-flight rated!")

The new Katana has drawn generally positive reviews from road testers, who love the GSX-R1000 running gear and enjoy the more relaxed riding position. We dig the looks of the stock bike, but love the way the Slabtown workshop has amped up the 80s vibe. And of course, being ICON, they're not taking that side too seriously.

"Will it survive low orbit?" Kurt wonders. "Can you combine it with three other Katanas and a Suzuki Swift to make a full-size Battle Bot? Stay tuned!" 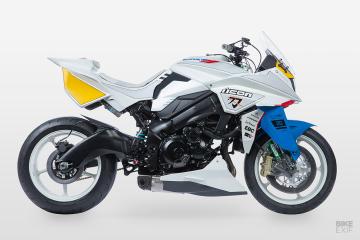