place in the custom motorcycle scene for motorcycles that eschew practicality, in order to push boundaries. This BMW R nineT from Zillers Garage in Russia is hardly the ideal grocery getter or tourer, but the level of craftsmanship at play here is on another level. And that's why we love it.

Zillers Garage is run by Dmitry Golubchikov---an AMD Championship winner who wowed us with his custom Vincent a few months ago. He mostly works alone, but occasionally calls in reinforcements on bigger projects. The commission for this R nineT came from BMW Motorrad Russia, but the inspiration came from the world of aviation.

Dmitry started out with a 2016-model R nineT , but all that's really left now is the motor, final drive arm and part of the frame. Just about everything else was created in-house, with the bike taking a full ten months to complete.

The R nineT's most striking feature is undoubtedly its retro-futuristic bodywork. With the exception of the boxer cylinder heads still poking out, the entire bike is wrapped in hand-formed aluminum sections. And the lines are inspired---from the robotic visage up front, right through to the classically styled tail section.

It's sci-fi in the best possible way, and it's neatly put together too.

That arch that runs over the top of the bars acts as a functional cockpit, with a Motogadget Motoscope Mini speedo and a set of push buttons all seamlessly integrated.

Dmitry also built the head and taillights into the bodywork, along with four LED turn signals on each side. There's even a slide-out storage compartment in the tail hump. It has a phone charging port in it, along with a socket to plug a battery charger into.

By now, you're probably wondering where the R nineT's ground clearance went. You're actually looking at it parked. It has no side or center stand---instead, it's designed to rest on the lower part of the belly pan.

A couple of buttons on top control a pneumatic system, lifting the bike when it's time to ride.

Zillers built the entire system from scratch---from turning the pneumatic cylinders, all the way to creating the control mechanism. The system runs inside the forks at the front, and with a revised shock linkage at the back.

Between the body kit and the hydraulics, it's already an impressive build. But Dmitry's in the habit of paying attention to every last detail---so this BMW has some sweet trim too. The machined aluminum wheels are fully custom; 18" units designed to resemble turbines.

Dmitry also fabricated a stainless steel two-into-one exhaust system, which snakes into the bodywork before emerging in a single muffler on the left. The bulges on each side of the main fuselage hide twin 3D-printed air boxes, kitted out with car air filters.

Under the hood, he's left the R nineT's engine internals alone, but the wiring loom is all new.

The foot controls and clip-ons are custom, and Zillers went as far as making one-off controls too. The hydraulic clutch and brake master cylinders were machined from scratch, along with integrated switches and some pretty wild detailing in how they mount.

There's a even license plate bracket mounted off the swing arm at the back, so this might be street legal, depending on Russia's roadworthy regulations.

The outlandish design is complemented by a muted monochrome paint job. Everything wears the same shade of grey---from the body, through to the fork legs, engine and wheels. It's accented only by subtle pin striping in a lighter grey. A set of oversized BMW roundels add the only glint of color.

A simple side stand will always beat a bespoke pneumatic system as a method for parking a bike... but that's not really the point here. Zillers' R nineT is outlandish and memorable, and a great reminder that we need builders that are willing to throw convention out the window. 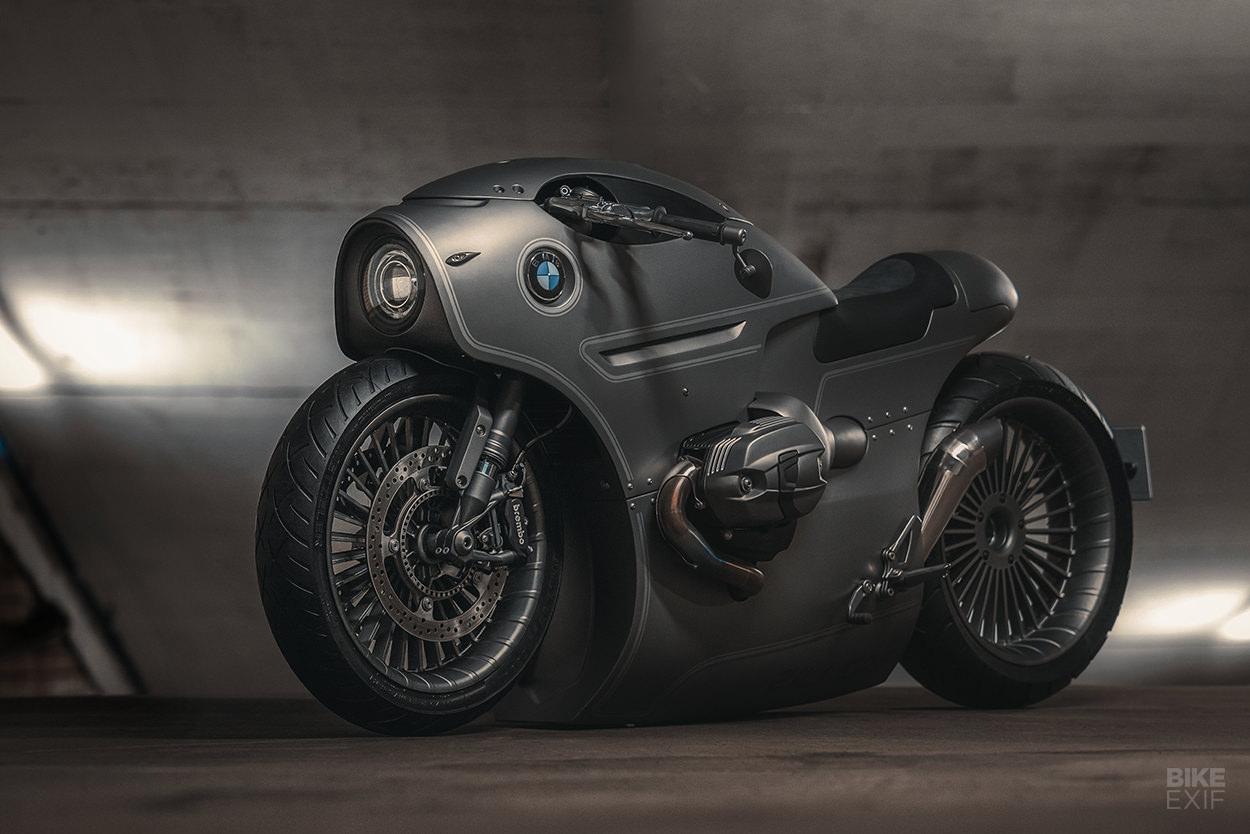