If you live outside Europe, one of the most interesting bikes you can't buy is the Fantic Caballero Flat Track 500 . The Italian manufacturer has been in business since the late 60s, and is best known as a maker of enduros and motards---but its most interesting creations are the 'Caballero' machines.

'Caballero' is a sub-brand, using the same approach as Ducati did with its Scrambler. The range taps into a similar ethos as well, with 'Rally' and 'Scrambler' models as well as the 'Flat Track'---but the engines are smaller, with 125, 250 and 500cc capacities.

All the bikes look good, but none are as crisp and cool as this 'Ice Blue Racer.' It's a custom Flat Track 500 built by Toshiyuki Osawa---the man behind the Cheetah workshop, and one of the most reclusive builders in Japan.

Osawa-san first registered on our radar when the German photographer Marc Holstein managed to wangle an invite to his Tokyo workshop a few months ago.

We now know that Osawa is also part of the seven-strong (and wonderfully named) Have Fun flat track team: a bunch of racers who are also accomplished builders.

Fantic Japan supplied them with a donor bike to mark the launch of the machine in the local market, and the whole team chipped in with their skills to complete the build.

In Japan, flat track races are short, and the Caballero has most of the right ingredients for success. "It has a simple chromoly steel frame, and a water-cooled engine that is easy to work on," says Osawa. "Plus 19-inch front and rear wheels---the best to base a flat tracker on."

The bodywork is the obvious visual change, with a new tank and seat unit hand-made by Osawa himself. "The silhouette is the traditional flat tracker style," he tells us, "a monocoque tank/seat unit with a shroud for the radiator."

The new seat makes it easy for the rider to shift forwards and backwards at will, with the upholstery by Skunk Kubota riding right up the tank.

Everything is tightly wrapped: so tight, there's a bulge on the left side to accommodate the fuel pump. The fuel cap is a race-style port.

The Caballero has plenty of zip: it weighs 145 kilos (319 pounds), and the low ratios of the six-speed gearbox make the most of the 40 horsepower short-stroke single.

Osawa has left the engine internals alone, but his compatriot Ducktail Watanabe has built a complete new race exhaust system to free up the breathing and get rid of the regulatory cat.

"The exhaust pipe is welded together from sections of stainless steel straight pipe," Osawa says. "It's a masterpiece with more than 30 welds; I wanted to create a smooth curve."

The sleek muffler is also one-off, "with good sound and performance," we're told.

Fantic's own suspension is up to scratch, as you'd expect from a brand with an off-road pedigree. So Watanabe has lowered the 41mm forks and retained the rear shock, which has enough adjustment to give a good setup for the track.

All that was left was to strip the bike of road-legal ancillaries such as the lights and instruments, and add custom handlebars to optimize the riding position.

Then the bodywork went off to Happy Fun rider ' Shakin ,' who sprayed it in ice blue metallic with intricate monochrome lettering and logos on top.

We're wondering how long that lovely hand-made bodywork will last, though. Judging by the way the team riders have been throwing the bike around, they're certainly living up to the 'Have Fun' name... 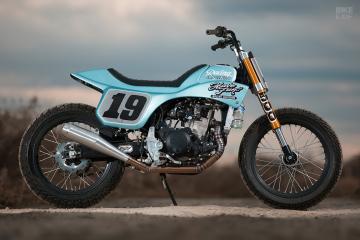