Aerodynamics is one area of motorcycle design that is getting a fair amount of attention lately. The focus in on reducing drag and increasing downforce, especially for sportbikes and track-focused motorcycles. Wings on the front of the bike are usually the first go-to, but Honda is doing things differently. The company recently filed some patents for aerodynamic elements attached to the rear of the bike. The patents were spotted by Cycle World .

The design is a super stubby tail with a unique tunnel element attached to the end of the tail. This is designed to channel air through the little bit of bodywork. As Cycle World points out, shorter tails on motorcycles have become common. It used to be that bike makers were doing fatter rear ends to help send air around the bike that came off the rider. Now the designs have changed.

This approach isn't new, but the specific design is. Honda takes it a bit further, adding a small wing and hoping to reduce wind resistance and increase downforce on the tail of the motorcycle. This design element might seem most at home on a race track, but Cycle World says it has roadgoing applications. The publication points to the fact that there are street bike lights incorporated into the design. There's also a license plate bracket. So, it would seem that Honda is thinking of putting this on motorcycles designed for street use not track use. 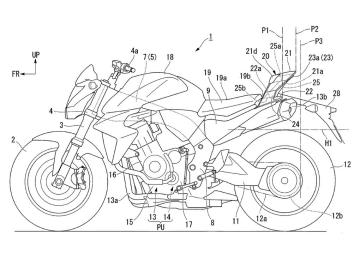