me yesterday when Ducati got its first Isle of Man TT win, I'd have scratched my head and then suggested Mike Hailwood in 1978, on the 900SS.

I'd have been wrong. The first machine from Bologna to win a trophy at the TT was a 250 Mach 1, when Alistair Mike Rogers clinched the 250 Production class in 1969.

I discovered this when digging into the background of Mach 1 after Ducati specialist Harné Heuvelman sent in details of his latest amazing restoration.

In the mid 1960s, the Mach 1 was probably the fastest 250 you could buy. And despite the model's fine provenance, if you find a running example in the classifieds today, you could probably get it for less than $10,000.

With less than 2,000 Mach 1s built, that sounds like a pretty good investment to us. But finding one is not easy: a huge number of Mach 1s were converted for racing use, and subsequently wrecked.

So when Harné was recently asked to restore an original 1966 model to its former glory, he was very enthusiastic.

Along with his father Harm and engineer Niels Schoen, Harné runs Back To Classics in the Netherlands, which is one of the go-to workshops in Europe for vintage Ducati enthusiasts.

"This bike came in from an owner in the UK, and it was immediately clear that it had been raced extensively," says Harné.

"To make matters worse, it had been neglected and forgotten for many years after its racing days. We had some serious work to do!"

As always with restoration projects, Back To Classics started with the frame and bodywork, putting missing frame lugs and brackets in the right places, and welding in some new parts.

The fuel tank and fenders had big rusted-through holes, which were welded and re-shaped before being prepared for paint.

"The engine also needed a lot of preparation," says Harné. "We repaired dents, scratches and broken-off cooling fins before the cases were aqua blasted and the outer covers polished."

With new valve seats and guides fitted, a new Arrow conrod attached to the crankshaft and a new piston bored and honed, the engine was re-assembled. "We fitted extra upgrades," Harné reveals, "in the form of coil valve springs, lighter valve rockers, and a new 12V alternator."

This particular 250 Mach 1, being originally sold in the UK, came with a useful front brake upgrade kit. "This kit was sold back in the 1960s by Vic Camp, the UK Ducati importer," says Harné. "It has an outer brake plate with direct levers on the two brake cams."

Although the 250 Mach 1 was originally delivered on chrome plated steel rims, this bike had a set of original 1960s Borrani rims---which Back To Classics also restored.

They also added electronic upgrades to this bike: a 12V electronic ignition system and a modern regulator were fitted under the fuel tank. The original 6V regulator was left in place---but has no actual function.

Back To Classics' work is always of the highest order, but Harné is especially pleased with this unusually rare machine. "One of Ducati's finest is ready to be taken to the road again," he says. "Where it belongs!" 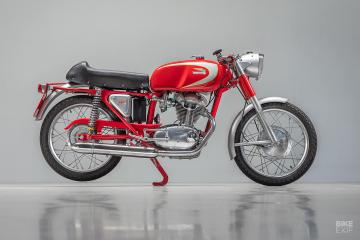