Honda this week, with a CB900 Bol d'Or from Spain, an Elsinore from Australia, and a Shadow 500 from Arkansas. Plus a new Lego Technics x Ducati kit from Denmark, if you've got a little time on your hands . Honda MT250 Elsinore by Fossick Moto

The MT250 Elsinore was Honda's first foray into purpose-built two stroke scramblers . It made waves then and it's iconic today---so it's nice to see a restoration that lives up to the legacy. And this one from Fossick Moto in Sydney, Australia, certainly does.

Steve at Fossick has a soft spot for the Elsinore, citing the simplicity of the two-stroke motor and the no-nonsense dirt bike styling as its strong points. His Elsinore is more resto than mod... but it does have a few neat custom touches.

On the one hand, Steve spent much of the project cleaning and polishing OEM bolts to better-than-new standards. And he even color-matched the motor to the original hue, and kept the bulky stock clocks. But he swapped out the bars, grips, cables for modern items, and replaced the turn signals with discreet LED units.

The seat's a custom job too, and the Honda's bulky stock tail light is gone. It's also got wider footpegs and new rear shocks, and a coat of satin black on the exhaust's expansion chamber. Every last inch of this classic scrambler has been cleaned and polished, and every last perishable item replaced. It's a great refresh that doesn't try too hard, leaning into the Elsinore's enduring appeal instead. [ More ]

His CB900 is sporting a Suzuki GSX-R1100 front end, fitted by installing a new stem in the Suzuki triple clamps. The rear shocks are from YSS, and the wheels are gold 17" Honda VTR SP01 items, shod with Metzeler Roadtec Z8 tires. Nacho used the GSX-R and VTR brakes at the front and back respectively, matched to Honda CBR600 controls via braided hoses.

There's no major engine work here, because Nacho was more than happy with the Honda's stock performance and character. So he just added pod filters, tuned the carbs, and installed a burly four-into-four aftermarket exhaust system.

There are some changes to the bodywork, but they all maintain that cracking 80s bruiser vibe. The fairing and boxy tail section are custom, as is the seat. Other upgrades include LSL clip-ons, a Motogadget speedo and a slick silver and gold paint job. [ More ]

One-Up's bikes are usually tough to pigeonhole into one style, and this Honda is no exception. Art started by building a new subframe and seat, then vapor-blasted the motor to a raw aluminum finish while the frame was in for powder-coating. The motor had some work done too; new gaskets, some valve work and a clutch overhaul.

The front end was lowered, and the rear boosted with a set of Progressive Suspension shocks. The wheels are 18" Honda Ascot hoops---painted charcoal silver and vapor-blasted for a contrast effect. Art fabricated the snaking pie-cut stainless steel exhaust headers himself, terminating them in a pair of Lossa Engineering mufflers.

Several other parts were drawn up and sent to a third party to be CNC machined, including the top yoke, rear set mounts and the plate behind the triangular headlight. The tank paint was a collaboration between Art and Eric Snodgrass, who added the silver leaf logos and pin striping details. The parts list is rounded out with new bars, grips and mirrors, and an iPhone for a speedo. [ More ]

Lego Ducati Panigale V4 R If you're not quite liquid enough to afford the extremely desirable 230 hp Ducati Panigale V4 R, but still want to park one at your abode, this might just be the next best thing. Everybody's favorite Danish toy company is about to release a 12" long, 6" tall model of the eye-watering superbike.

The 646-piece set forms part of Lego's mechanically focused Technics line, and that means you can expect a lot of moving parts. The Lego Panigale has suspension that goes up and down, a 'chain,' and a working two-speed gearbox. There's also a faux dry clutch, brake discs, a kickstand and a paddock stand.

It has some pretty killer details too---like a 'dashboard' (which is basically just a sticker), and an accurate set of decals.

If you're tickled, you'll need to wait a bit though---this set only goes on sale in June in Europe (at €60) and in August in the USA (at $70). And you can buy it via either Ducati or Lego's official channels. [ Via ] 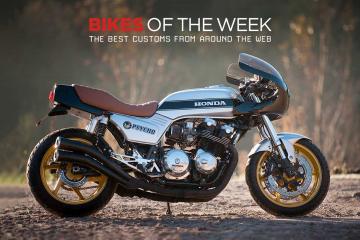