from the early 90s, the BMW R100R suffers from an identity crisis. BMW released it as a sort of classic roadster version of the mighty R100GS---combining the tank and seat of an adventure bike with smaller wheels, revised suspension, and a 'retro' chrome headlight and clocks.

Despite its quirks, the R100R has a few things going for it. It came out with the most up to date version of BMW's mono-shock drive shaft swing arm---the 'Paralever.' It also had state of the art tubeless spoked wheels, and the now sought after 'peanut' valve covers from older boxers.

The crew at Differs in Vilnius, Lithuania, know just how to extract the maximum from a donor. Starting with a 1992 model R100 R, they ditched the bad, ramped up the good, and ended up with this razor-sharp cafe racer.

So many airhead customs are simple nip and tuck jobs, but Differs went all out here. Instead of a simple subframe trim, they grafted on an entirely new unit that runs all the way from the front of the tank to the tail. They also trimmed off any excess brackets---including the unsightly passenger peg mounts.

The new design pitches the entire bike forward, visually, and even includes a subtle step-up towards the seat. The only bodywork is a hand-shaped aluminum fuel tank, and a blade-like rear fender.

There's a lot of great detailing at play here. The tank wears a set of on-brand BMW roundels and a Monza-style fuel cap, and the custom seat's been covered in a lush Alcantara. The rear LEDs are embedded in the rear frame rails, and there's a slim LED tail light sitting up top.

The Beemer's rolling on updated suspension too. Differs swapped the front end for the upside down forks from a 2001 Aprilia RSV 1000 Mille, held by way of a custom steering stem. There's a new YSS shock doing duty at the rear.

The crew kept the R100R's original 18F/17R wheels, but wrapped them in modern Metzeler Roadtec 01 tires. The OEM rear drum brake is still in play, but the front is thankfully now stopped by the dual Brembo setup from the Aprilia.

Despite being a later model airhead, the R100R was treated to an engine and carb overhaul. And for maximum reliability, it still uses its original air box. Gasses exit via the stock exhaust headers, which were sandblasted and refinished in black, then capped off with a GP-style silencer from Spark.

Differs tore into the wiring too, redoing everything around a Motogadget m.unit controller and a new gel battery. They pretty much threw the entire Motogadget catalog at the project, including a new speedo, switches, bar-end turn signals and bar-end mirrors.

There's also a new LED headlight up front, with a set of clip-ons, ODI grips and new levers just behind it.

It's not apparent at first, but the team also went to great lengths to nail the finishes on the BMW. Everything's been redone in black---from the Aprilia forks through to the motor, frame, wheels and even the shaft drive. Polished BMW motifs on the engine block offer a hint of contrast.

That Dominator was the first Differs bike we featured. At the time, shop boss Povilas Vaisiauskas described it as "minimal-yet-edgy, but still a practical bike, rather than one to 'look at' only." And that rings true for this BMW too.

Now off to its new owner in San Francisco, this BMW is another smash hit from the Baltic outfit. Anyone who wasn't paying attention to them before, sure is now. 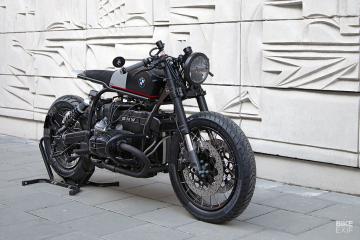