The INT650 and Continental GT

Royal Enfield , like many other motorcycle manufacturers right now, is having a tough time selling motorcycles in the wake of the COVID-19 pandemic. The company's sales were down by 44 percent in India in March, according to Car and Bike . There is some good news, though. The company's 650cc motorcycles, the INT650 and Continental GT, are both selling pretty well still.

According to Gaadi Waadi , the motorcycles sold more than 20,000 units so far, which is higher than any premium range of motorcycles in India. That is good news for Royal Enfield and the market as a whole. These two 650s are two of the best bikes that Royal Enfield has put out in a long time, and it seems that consumers are taking note of them.

These sales numbers are seen in India, but the bikes are selling abroad, too. Rushlane reports that exports for the company were actually up by 33 percent in March. The 650 motorcycles topped the export list , and by quite a large margin, suggesting that Royal Enfield has a true winner on its hands. If these bikes are selling well through a global pandemic, imagine how well they will sell after the pandemic fades. 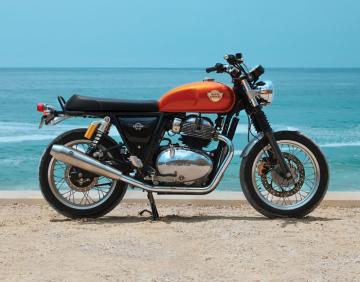