a feature on a bike from South Korea before. The local custom scene is tiny, and builders are heavily restricted on the modifications they can make---with a legal system similar to the German TÜV. Frame mods are totally out, and it's not even possible to register a new bike with a carburetor.

So we have to give top marks to Tae Hyeong Ha, owner of Winterless Craft, for creating the road-legal custom shovelhead seen here. He's also given us an interesting insight into the realities of custom building in a country that still has a little catching up to do with its neighbors.

Tae's workshop is based in Namyangju, a satellite city on the Seoul Ring Expressway. He shares the space with Daegun Jung, who handles the business side of things.

"Tae doesn't speak any foreign languages," says Daegun. "But like many local builders, he watched the Discovery Channel show Biker Build-Off . The next week, he left his design job and jumped into the custom bike industry!"

Fifteen years after that career-changing move, Tae shipped this shovel to the Yokohama Hot Rod Custom Show ---so it's almost certainly the first Korean bike to be displayed at Mooneyes.

"When we started this project, we considered building our own frame," says Daegun. "But that's against Korean law if the bike goes on the road. So we decided to work on an existing, registered bike."

Tae tracked down a legal donor: a registered custom with an S\&S 93ci Shovelhead engine and a four-speed 'box. "We thought 93ci motor and four-speed tranny were not good for a smooth riding feel, so we decided to use a new five-speed from Baker."

Winterless Craft also decided that the old-school bobber look was the style to go for, with modern parts. "It was built for shows," says Daegun. "But our philosophy towards custom bikes is that they always have to be usable on the road. So for drivetrains and brakes, we use reliable parts from well-known manufacturers."

Even from Japan, the nearest source of known-brand V-twin parts, shipping took around ten months on average.

Tae has used brake calipers, master cylinders, grips and hand controls from Performance Machine. The wheels (F19/R18) are RSD's 'Hutch' design---"chosen because the spoke shape is similar to snow, which is a symbol of Winterless Craft." But most other components are handcrafted---from the sheet steel split tank to the bars to the foot controls, and even the fuel cap.

Tae has fabricated multiple types of mounting brackets, and created a one-piece seat and fender unit that mounts directly to the frame. A local specialist called 'Right Hands' built a white leather seat pad on top of a fiberglass base.

The frame itself caused issues: the plan was to chrome it, to match the refinished engine cases, but Tae couldn't find a chrome plater with a bath big enough to accommodate the frame. So it's been painted in an icy blue flake.

The springer forks are from Led Sled Customs in the States. "We were trying to find a springer fork that has a narrow width," says Daegun. "If it was any narrower than the fork we've used, we wouldn't have been able to install a front brake!"

The exhaust is custom made though. "To keep a skinny profile, we put the exhaust as close as possible to the frame. It also has a little heat shield to prevent shoe burns. The exhaust was actually first painted in silver---but it looked awful, so we chromed the whole thing." Hidden baffles were installed to reduce the noise level.

Last in line was a tidy-up of the electrics, with new wiring concealed within the frame. Everything runs into a Motogadget m.unit, which also powers a Motogadget speedo.

The almost invisible blinkers are Kellermann 'Atto' units, but the head and tail light assemblies were turned on the lathe in the Winterless workshop---along with the mid controls.

After 15 years in the business, Tae had a bike worthy of the Mooneyes show, but as a perfectionist, he still wasn't satisfied. "There are a lot of areas he wanted to put more hours into," says Daegun.

So Winterless Craft are planning another build, this time for the 2022 show. Hopefully the Korean custom scene would have grown a little more by then. 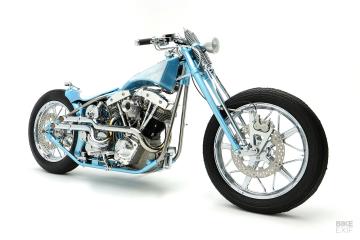