Originally founded by Pepo Rosell (before he went off to run XTR Pepo), Radical Ducati has resurfaced under Frenchman Yann Thomas . And by the look of this Ducati 1198S Corse, he's doing a great job of carrying the torch.

The 1198S Corse was a special edition with a unique livery, and some trick running gear too. Radical Ducati kept the mechanicals, but have stripped off most of the bodywork. The Corse's fuel tank originally came in a brushed aluminum finish---so that stayed, sans decals. Out back is a custom built subframe, with a hand-shaped aluminum tail section.

With a pretty sweet engine configuration out the box, there was no need to fiddle with internals. So Yann simply added a full SC Project exhaust system---shaving weight and boosting power.

Yamaha Virago XV920 by Augment Motorworks Nick Acosta of Augment Motorworks is still young, but he's already put out a couple of hits; enough to get noticed. That's why the owner of this Virago dialed Nick's number when his bike needed saving.

The client had originally taken the 1982-model Virago to another custom shop to work on, but in six months all they had done was strip it down. So he took it home in boxes, and got Nick onto the job. Starting with a Virago engine and frame (with some bad welds on it), a Ducati 1098 front and rear end, and a Benelli tank, Nick got cracking in his Toronto workshop.

He's done a stellar job of getting the various parts to play well with each other, despite working with a now-limited budget. The 1098's upside-down forks, single-sided aluminum swing arm, Marchesini wheels and Brembo brakes are all in play, giving the Yamaha a serious handling boost.

The Benelli tank is on now, matched up to a custom subframe and seat. There's also a new two-into-one exhaust system, and the original 9" Yamaha headlight's been remounted up front. The result is a neat, no-nonsense cafe racer---and a quality save of a project that was destined to fizzle out. [ Augment Motorworks \| Images by Mark Luciani ]

Norton Commando 850 by British Beat Norton has been in the news a lot lately. First the company folded spectacularly, then Indian firm TVS bought them . TVS has promised to return the brand to greatness---so it would be remiss of us not to include a classic Commando in our weekly round up.

This 1974 Commando 850 belongs to Naoki Sugibayashi , all the way over in Tokyo, Japan. Naoki-san decided to overhaul his beloved Norton after more than two decades of ownership, so he sketched out a bunch of ideas, and headed over to Katsunao Suzuki at the Japanese workshop British Beat . Naoki-san wanted a "Rock 'n Roll Commando. Built to ride at high speed in the city of Tokyo."

British Beat went to town on the Commando, with a number of internal and external mods. It's now running with a 2S Combat camshaft, upgraded pistons and modified valves. There's a Boyer ignition with Dyna coils and leads, and 33 mm Keihin flat-slide carbs. Up front you'll find a stunning Robinson 230mm 4LS drum brake, laced to a shouldered alloy rim.

The new bodywork consists of a fiberglass tank and tail, capped off with a studded leather perch by Backdrop Leathers. The finishing kit is as classic as you can get: clip-ons, a Monza-style gas cap, a Lucas-style taillight, and Smiths dials. But the cherry on the cake has got to be that deep black metalflake paint job. [ More ]

Harley-Davidson Sportster by H-D Barcelona Battle of the Kings is an annual dealer custom contest run by Harley-Davidson. But they recently ran a second contest: ' King of Kings ,' a best-of-the-best twist on the competition. This entry caught our eye, from Harley-Davidson Barcelona.

The crew started with a Sportster Roadster---a model that has both cafe racer and street tracker cues out the box, but doesn't quite hit the mark on either style. H-D Barcelona has ramped up both aspects to build a cafe-tracker hybrid, and it somehow gels.

For the bodywork, the team built a custom tailpiece, and radically modified the Sportster's original fuel tank. If you look closely, you'll notice that the sides of the tank are actually transparent. An aftermarket belly pan rounds out the lines nicely.

The cockpit features H-D catalog clip-ons, with RSD controls that have been modded with integrated turn signals. Up front is a Free Spirits number board with embedded headlights, and an extra LED bar lower down.

H-D Barcelona kept the stock 19F/18R wheels, but re-painted them. There's a set of Öhlins shocks out back, and a custom two-into-one exhaust. The paint job might be a little loud for some, but it suits the performance vibe that the crew's gone for here. [ More ] 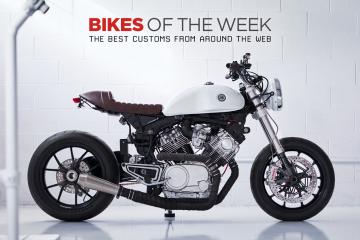