In Too Deep: A KTM Supermoto flat tracker by Hombrese

bike is a one-way ticket down a very deep rabbit hole. Make just one change, and soon you'll have a head full of ideas and a project that's snowballing fast. That's what happened with this KTM 950 Supermoto---where a simple wheel and suspension swap turned into a full-blown hooligan flat tracker conversion.

Uwe Kostrewa at Hombrese Bikes pushed the project over the finish line, but the initial work was actually done the KTM's owner, Patrick. The two Germans are good friends---they worked together for a while, and their workshops are right next to each other in Cologne.

The project was conceived when the guys headed over to a training day at Dirt Track Lelystad in the Netherlands, for their first flat track experience. The bug bit quick, and each one started shopping for their own bike.

Uwe settled on a 450 cc KTM single, but Patrick wanted something bigger---so he picked the 98 hp KTM 950 Supermoto.

He tore into the big twin right away, focusing on the stance and ride height. He installed a set of KTM Super Duke forks into the OEM yokes, then took 20 mm out of the rear.

The wheels were re-laced with a pair of 19" rims, powder coated, and shod with Dunlop DT3 dirt track rubber. Patrick had to fettle the oil cooler too, since the front wheel was now hitting it---so he moved it slightly, and took some superfluous material out of the casing.

Around that time, Patrick and Uwe headed back to Lelystad---this time with their new bikes. The 950 got the nod of approval from one of the instructors, and he suggested Patrick enter it in Hooligan class racing. Not long after, Patrick piloted it to a 2nd place in his class, at the Punk's Peak hill climb at Wheels \& Waves.

Buzzing from the result, Patrick asked Uwe to take the KTM to the next level as soon as they got back to Germany. So when winter hit, it went onto Hombrese's bench for a full makeover.

"I think he likes my style and my creativity," says Uwe. "And my workshop has more tools!"

Uwe stripped the bike down, and started by reworking the rear end. The 950 Supermoto's fuel sits under the tank, and Uwe wanted to keep it that way---but on his terms. This would prove to be the most challenging part of the build.

The work included fabricating an all-new subframe, along with an aluminum fuel cell to sit inside it. A lot of wiring had to be moved around, and there's a custom oil tank hiding away under there too.

Up top is a flat track tail section from Survivor Customs in the UK. It's a sneaky setup---one screw releases the seat pad, which comes off to provide access to the fuel filler. For the front, Uwe took a fiberglass tank from a Sunday Motors mini-tracker, and retro-fitted it to the KTM's frame by splitting it in two and reshaping it.

Uwe did some crafty work in the cockpit as well. The ignition's been relocated to just in front of the tank cover, with a neat custom-made mounting plate. Out front is an aluminum number board, built in the same style he uses for all of his flat trackers.

The bars are a set of ProTaper dirt track bends, with ProGrip grips and a simple kill-switch. Keen eyes will notice the lack of a foot brake---it's been replaced by a one-finger lever above the clutch control.

The KTM's LC8 motor is plenty powerful for slinging around a dirt track, so the only change here is the exhaust. Uwe re-worked the headers into a low-slung two-into-one arrangement, capped off with an aftermarket muffler. It's a damn sight lighter too now---down from the original 210 kilos to 167, wet.

With sharp new lines and a refined setup, all the KTM needed now was a fresh coat of paint. The guys settled on a brilliant color---the same red Honda used on the CR500 in the late 80s.

Patrick must be itching to get it out on the track... and glad he didn't settle for 'good enough.' 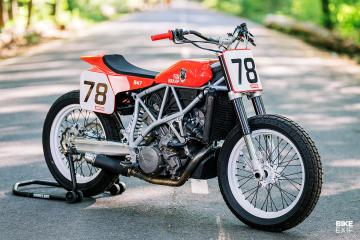