Featuring a special guest appearance by an RC45 on track!

There are few things more relaxing than watching craftsmen at work, neatly putting one of Honda's most legendary bikes together piece by piece. If you're looking for a little inspiration in an uncertain time, look no further than this soothing-as-heck Honda VFR750R RC30 promotional video. Those titanium connecting rods still shine like a secret treasure hoard, decades after the fact.

Watching a welder go to work on the aluminum fuel tank and sand-cast aluminum steering head is infinitely soothing, and absolutely the kind of moto-related balm we can probably all use right now. It's a reminder that taking pride in small things and doing them well matters, especially when they're ultimately part of a larger project.

There's no telling from this video how long this team has been working together. Thanks to social media, by now everyone knows that selective editing can make sure you only ever show your good side to the world. Still, watching the team members assemble the engine so precisely, and with minimal fuss, is somehow all kinds of reassuring.

Just in case getting up close and personal (well, via a video, anyway) with an RC30 isn't cool enough, what else should show up to trade laps with the RC30 at the end than an RC45 ? If I have one very tiny complaint about this video, it's that there isn't enough joyous engine noise in its composition. You get to hear a little bit, but when the RVF750 HRC shows up, this filmmaker decided to stick with the dreamlike film score of "Gymnopédie No.3" as played by Aki Takahashi. I'm not mad, because it's beautiful, but then again I always want to hear more gorgeous engine sounds. What are you gonna do?

The slow-motion ballet of the two legendary Hondas on track is completely glorious to behold, and it never fails to make me happy to see promotional videos like this resurface somewhere on the internet. 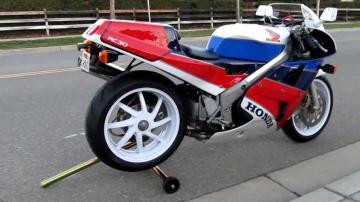