rebuilt in the style of the classic 900 Super Sport Desmo, a Moto Guzzi V7 Sport endurance racer converted for road use, a Honda CBX750 cafe racer from Spain, and the strange tale of the BFG/MBK 1300 motorcycle---powered by a Citroën car engine.

1972 Moto Guzzi V7 Sport One of the most intriguing motorcycle shops in the world is Legend Motors in Lille. It's an Aladdin's cave of beautiful machinery, and one of the current residents is this V7 Sport.

This machine has a long and storied racing history in France, earned at famous tracks such as Le Mans, Le Castellet, and Magny-Cours. Moto Guzzi claimed 70 horsepower for the roadgoing version, but this one will have considerably more.

It also has custom bodywork, including a huge fairing that betrays its endurance racing origins.

After retiring from racing, the V7 was converted for road use, with discreet lighting and mufflers that bring the sound level down to acceptable levels. "The previous exhaust was simply deafening!" reports the French site Un Pneu Dans La Tombe .

Ducati 900 Supersport Darmah tribute In the mid 70s, Ducati had a problem: the 860 GT wasn't selling very well, due to its quirky, angular styling. So they introduced the magnificent 900 Sport Desmo 'Darmah' in 1977, and a year later, added a sportier version---the beautiful 900 Super Sport Desmo, with a half fairing, clip-on bars and a higher compression engine.

Belgium's Barn Built Bikes revealed this striking tribute to the 900 SSD earlier this year at the Motorbike Expo in Verona. It's based on a 2000-spec Ducati 900SS ie---another one of those Ducatis with somewhat polarizing bodywork. But after a spell in the Tremelo workshop, the Ducati now looks the business.

Builders Sven, Bart and Derek have created all-new bodywork, and modified the subframe to help it fit seamlessly. There's also a new exhaust system with Conti mufflers for a solid hit of 70s style, and a set of Alpina tubeless wheels shod with modern semi-slicks.

With 80 horsepower on tap and a probable curb weight of just over 400 pounds, this machine will be perfect for blasting around the back roads. If you like the style and have the readies, it's for sale. [ Barn Built Bikes ]

The Citroën-powered BFG/MBK 1300 If you like to investigate the more obscure corners of motorcycling history, Jason Cormier is your man. He runs the website OddBike , which shines a light on the strangest bikes ever made, and his latest catch is a doozy---a spectacularly unsuccessful French motorcycle that was powered by the 1,299 cc air-cooled boxer four used in the iconic Citroën GS car.

History is littered with examples of motorcycles powered by car engines, and it's usually not a good idea. The late 70s BFG/MBK 1300 was the brainchild of three Frenchmen who felt it was time that the country produced a heavyweight bike. They managed to secure a grant for development, and the prototype became the pace motorcycle for the 1980 Tour De France.

Despite a government contract and a Police force order, BFG went bankrupt in the early 80s. Which is unfortunate, because the machine was well engineered, and reliability issues usually related to repurposed parts from outside suppliers rather than inherent design faults. Bike-urious has the full story .

Honda CBX750 by Plus 3 Motors Stocks of unmolested CB750s seem to be thinning out these days, so custom builders are turning their attention to later (and frankly better) Honda middleweights.

In Europe, the mid-eighties CBX750 is in the vanguard. It wasn't a big seller, and it's not particularly exciting, but it's well made and was hugely popular with police forces. It's also well priced on the secondhand market, and enjoyed a second production run in Brazil---which makes parts readily available.

This very stylish 1984-spec CBX750 comes from Plus 3 , a trio of friends who opened a workshop in the small Spanish town of Almoradí last year.

The fuel tank and engine are the only original parts left on this build. The forks are from a Suzuki GSX-R600, the shocks are from a later model Honda CBR, the wheels are classy 18-inch spoked items, and the back half of the frame is new.

Subtle fibreglass covers mask the fairing indents on the fuel tank, another pair of covers hides the gap under the seat, and the new tail unit mimics the lines of the tank perfectly. A new airbox (with panel filter) makes for fuss-free tuning, and there's a stubby new exhaust at the outlet end.

The vibe is 21st century cafe racer, with a cool retro-modern aesthetic and a perfectly judged icy blue color scheme. Plus 3 is a name to watch. [ More ] 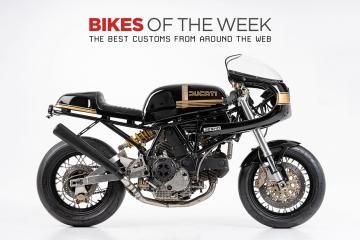