Ride along with off-road racer Lyndon Poskitt on a KTM 690 Rally and an Alta Redshift MXR.

If you've ever seen even a moment of the Erzberg Rodeo , you know the event is complete madness. What are the differences between qualifying on a KTM 690 Rally and an Alta Redshift MXR, though? This handy comparison video from hardcore off-road racer Lyndon Poskitt stacks his 2017 Rally and 2018 MXR qualifying experiences one right after the other.

These end-to-end onboard videos give you a view of the Erzberg Rodeo from each bike like you may not have seen before. Even on a single vehicle, without all the other bikes jockeying for position, it's still breathtaking terrain to cover.

The Rally sounds tough as it covers the course from end to end, growling and grumbling and just generally not caring even a little bit about climbing giant hills covered in rocks. In Poskitt's capable hands, the Rally just goes about its business calmly, coolly, and collectedly, even when it starts raining. I mean, what fun would a ride like this be if you didn't get a little muddy, too? At least it isn't an all-out deluge.

Then it's the Alta Redshift MXR's turn to shine, and although conditions are completely different because it's an entire year later, even the bright sunshine and blue skies can't stop this electric ghost from whirring its way up every single rock-encrusted hill.

At times, it's so dusty that you'd probably hate every second if you weren't wearing some kind of full-face helmet and/or goggles. Luckily, it doesn't seem to blind Poskitt. There seems to have been some rain recently, as there are a few puddles along the way, but it's mostly dust cloud central.

All that adds a bit more to the seemingly ethereal nature of this run. I'm not entirely sure if it's because we know what happened to Alta and I can't help viewing it through that lens, or if it's just the nature of the electric beast.

In any case, both runs are extremely fun to watch and to listen to. If you get a second, pour one out for Alta, or at least toast them with your favorite beverage of choice. 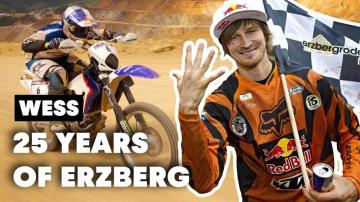