Could MotoGP Start Its 2020 On-Track Season In July? Maybe.

More than one race season scenario is on the table right now.

Although it might feel like it's been 84 years since we last saw live MotoGP racing, MotoGP promoter Dorna is cautiously optimistic that the series could return in July. That's July, 2020, not 2021. We were surprised to read that, too, but if you don't have hope, what do you have?

"Since Qatar we have been working very hard, trying to allocate a calendar for this year. We have been in close contact with FIM, with IRTA (International Race Teams Association), especially with the manufacturers. And then we see different scenarios. The most optimistic is to try to start in the end of July," Carmelo Ezpeleta, who is Dorna's CEO, told BT Sport.

"It depends on the situation because we need to take care about two things," he continued.

"One is any individual country will need to allow us to [race] when its doors are open, and second is the possibility to travel from one country to another. Then, in principal, we will try to make a championship in Europe, starting at the end of July, beginning of August."

"Then start to make races, and depending what is the situation, then we will consider the possibility to go to the end of the year if the countries allow us to do it, but always finishing on time [in November]."

Ezpeleta went on to call this the 'best possible scenario,' but acknowledged that it's certainly not the only one. In previous meetings, Dorna and all the MotoGP, Moto2, and Moto3 teams came together and determined that the minimum number of personnel required to hold a successful race weekend is 1300. That's a roving pack of 1300 humans all working very closely together, which is pretty difficult to picture right now given the current state of the global pandemic.

There's also a second scenario Ezpeleta alluded to that involves starting the season in September. It's much more difficult to consider logistically, and he hasn't ruled out the idea of holding two MotoGP races in a single weekend to make a full season possible.

We all know that racing comes with accepted levels of risk, but nobody on earth woke up and said, "I really want to go one-on-one with a global viral pandemic today." It would be nice to see us all get back to a place where holding events like this is a reasonable idea, but none of us knows how likely that is to happen by July. 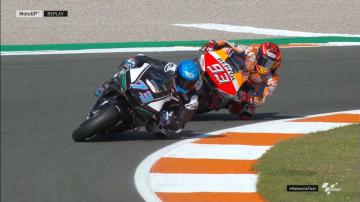