Ever heard of analysis paralysis? It happens when you've got so many ideas, your project stalls because you can't make your mind up. Tomoyuki Soeda at Deus Ex Machina 's Japanese outpost had a dose of it when he designed this R100RS---but then he hatched a plan to overcome it.

Soeda-san managed to distill his ideas down to just two concepts. And they were close enough for him to pull off an inspired move: build two customs on one base.

You read that right: you're looking at a single 1982-model BMW R100 RS, dressed up in two ways. Although they look strikingly different at a glance, close inspection reveals that there are only a handful of parts that separate them.

Those are the tank, headlight shroud, tail cover and exhaust system---and it takes only an Allen key and a wrench to swap them out.

Tomoyuki had owned the R100RS for a number of years, waiting for the right moment to customize it. Remarkably, it had only 4,000 kilos on the clock; barely broken in.

But that didn't stop the motor from getting a major cleanup, complete with a set of 'peanut' valve covers and fresh black and polished finishes.

The air box is gone, replaced by a custom-made cover that now houses the battery. It's a common mod, but it's usually done in such a way as to mimic the original design. Here, Tomoyuki opted for a more elongated effect, filling the space under the tank in a unique way.

He also tweaked the BMW's stance, by installing new rear shocks and taking 7 cm out of the front forks, which have been modified with external springs. The OEM wheels and brakes were refurbished, and a set of Shinko dual-sport tires thrown into the mix.

Tomoyuki built a custom subframe, then neatened up the adjoining bits, including the shock mounts, and the unsightly stock passenger peg brackets. The arrangement is well braced too, and is finished off with a neat plate bracket, and an embedded LED taillight from Kellermann.

A one-off red diamond stitched seat sits up top; it's the only bit of bodywork that the two designs share. There's a removable rear cowl that mounts over the hump, that's been hand-shaped from aluminum with a chic ducktail design.

It's matched up to a handmade aluminum headlight nacelle up front, which bolts on over a 60s tractor headlight.

The white fuel tank is a custom-made unit---adorned with an aluminum 'strap' that matches the tank and tail, and throwback BMW colors. But the black fuel tank is actually the original R100RS unit, that's been redone in a satin black, with gold pin striping. Despite their radically different proportions, both fit the Beemer like a glove.

The other optional setup is the exhaust system. You've got the choice of mounting two custom-made slash-cut mufflers high or low, by way of a pair of swappable header extensions.

But the best part is that all the parts are interchangeable---so you can swap them out individually, depending on your mood. By our calculations, that gives you sixteen different ways to configure this handsome boxer.

Both designs share the same finishing kit: vintage chromed handlebars with stock BMW controls, bar-end turn signals, a single mirror, and a small digital Motogadget speedo. And since a vintage tractor light is bound to be woefully inadequate, there's a 4.5" Bates-style headlight mounted lower down.

No matter which way you cut it, 'Two Face' is a handsome street tracker that should provide its new owner (it's jut been sold) with hours of fun---both on the street, and in the garage.

It's also a fitting farewell build for 'The Residence of Impermanence' in Tokyo's buzzy Harajuku district. They've just shut those doors, and will soon be opening a new shop half an hour away in the historic Asakusa area. And we're glad to hear that Tomoyuki is already buttoning up a new build to be displayed there. 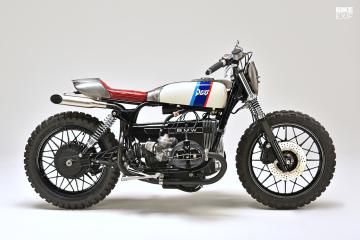