Arai's focus is on safety above all else , but its continuous radius shell construction isn't the best for aerodynamics. On the racetrack, aerodynamics is everything, so the company released a new spoiler for the RX-7X ( Corsair-X ) helmet. Arai worked with MotoGP rider and LCR Honda team member Taka Nakagami to test and ensure the spoiler created the desired effect.

"MotoGP reaching over 350km / h," said Nakagami, according to Visordown . "Since using this racing spoiler, my head shake has been significantly reduced , which allows me to focus more on the race. Also, the top speed is higher than before and the effect is great! And this spoiler will be very stylish, so I recommend it to everyone."

The spoiler comes in six different colors: white, black, glass white, glass black, flat black, and light smoke. This means you should be able to find one that matches your helmet. Right now, it's only available in Japan, but it will likely soon reach other markets. It's priced at ¥4400 ($41 USD) for light smoke and ¥5500 ($52 USD) for colored variants. 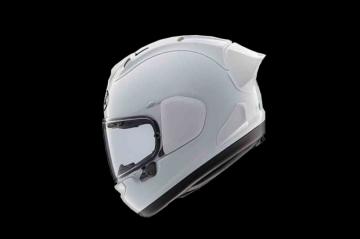