the day, scramblers were really just road bikes that were adapted slightly for desert use. And the same is true for the custom scene---when the scrambler style took off, builders were slapping knobby tires on everything from Honda CX500s to Kawasaki W650s.

But a new trend has emerged in recent years; taking bonafide dirt bikes, and restyling them with throwback looks. And if you're building one of those, you'd be hard-pressed to find a better donor than the Honda XR650L.

The XR650 has remained relatively unchanged since it first broke cover in 1992 (and you can still buy a 2020 model in some countries). A close cousin to the XR650R that dominated the Baja 1000, but without the aluminum frame and with less power, it's a robust, air-cooled thumper with unlimited potential for modification.

Most XR650L owners 'uncork' it, throw on a long range tank and call it a day. But Árpi Bozi, who operates as Mokka Cycles out of Budapest, Hungary, had different ideas.

Árpi is fast building a reputation for his sharp eye and slick finishes, and he's put both to good use on the Honda.

He started with a 2007 US-spec XR650L that had made its way into Hungary some years ago---and is now headed back to the States, to its new owner in Texas. "The goal was to build a clean and high quality scrambler ," he tells us. "The kind Honda should make."

Since this XR650 probably won't see hardcore desert use, Árpi sacrificed its 21" front wheel for a 19" unit, for better visual balance with the 18" rear. Both hoops are new though, with Moose Racing rims laced to the stock hubs, and shod with dual-sport specific Heidenau K60 tires.

The front forks were rebuilt and lowered slightly, to tweak the stance further, but the rear was treated to a full transformation. Árpi trimmed the mono-shock mounts from the frame and swing arm, and grafted on a new set of twin shock mounts. The rear's now held up by a pair of YSS piggyback shocks.

The subframe is new too, but it's more than just a cut-n-loop job. Put it side-by-side with the stock frame, and you'll spot new down tubes, gussets, and even bungs to mount passenger pegs to.

Higher up are a couple of details that have become Mokka signatures: the slim leather seat, and the hand-made battery box with its mesh inserts. The bodywork is rounded out with a reproduction classic Honda tank, and three fenders.

Yes: three. There's a high-mounted fender up front, and a low-mounted hugger mounted to the swing arm at the back. That one's there to actually catch muck, with a stubby unit higher up to round off the tail, visually, and to hold the tail light and license plate. It was also the trickiest to make, with Árpi burning through three iterations before the proportions were just right.

On the mechanical side, Árpi refreshed the motor and axed the air box in favor of a K\&N filter,then fabricated a stainless steel two-into one exhaust. The wiring's new too, built around a Motogadget m.unit and a new CDI.

As with all Mokka builds, the Honda's color scheme is simple and tasteful. The sandy hue on the tank is offset against a light grey frame, with warmer grey accents on the motor, swing arm and fork lowers. There's nothing that screams for attention, and even Mokka's own branding is extremely subtle.

This minimal scrambler is not only a worthy entry into Árpi's fast-growing portfolio, but it's also a textbook example of a retro scrambler with proper dual-sport aspirations. We certainly wouldn't be mad if you handed us the keys. 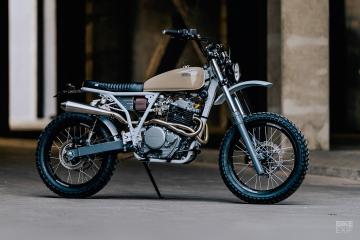