A while ago, Roel helped a friend to build a custom K75. Then Roel heard that his mate was expecting a baby---so he decided to build the kid a balance bike, inspired by his dad's custom.

The Dutch designer started by sketching out the pint-sized two-wheeler in SolidWorks, then bought a pile of stainless steel tubing to build it up. The frame and forks were bent, cut, welded and hand-brushed at home. The fork 'boots' are 3D printed plastic items, but they're just for show, since the forks are rigid.

There's an alarming level of detail here. Roel had the triple trees laser cut out of stainless, with his own logo etched into the top yoke. Then he welded on the bars, and finished them off with bicycle handlebar tape. The headlight's an old bolt-on part for classic cars, but it now runs with a small LED inside, and a battery hidden in the steering stem.

The faux fuel tank was 3D printed in two halves, and finished in the same green as the dad's bike. Better yet, it's easy to unscrew them, and bolt on a new set if you want to change colors.

As for the hoops, they're standard 12" balance bike wheels, wrapped in Kenda tires, because the tread pattern reminded Roel of classic motorcycle tires. The seat's another off-the-shelf balance bike part, albeit a high-end one.

The owner of this mini-Beemer is going to be one stoked little tyke---as soon as he's big enough to ride it. Who else thinks Roel should put this into production?

Triumph Thruxton by Nova Motorcycles This 2013-model Triumph Thruxton rolled into Nova Motorcycles ' Massachusetts workshop for a simple spruce up---but the crew had a bigger vision. They'd just seen a bunch of great-looking Triumph customs at a major bike show, but all retained the stock fuel tank. So Nova figured the best way to make their Thruxton really stand out would be to use all-new bodywork.

Nova designed a new tank and tail unit, which was then executed in Kevlar-reinforced fiberglass by nearby specialist Tannermatic . Tannermatic also built the carbon fiber front fender, while Counterbalance Cycles made the seat. The green paint code's straight out of Aston Martin's book, complete with a subtle yellow highlight.

But there's more than just new bodywork at play here. Nova added bolt-on braces to the Triumph frame too, inspired by the work of Colin Seeley. And they engineered a stunning triple tree and 'floating' headlight mount, in collaboration with COFAB Engineering.

They also threw a full catalog of Motogadget parts at the build, including a speedo that sits behind a laser-cut acrylic screen in the top yoke.

Other upgrades include a two-into-one exhaust, an air box delete kit and smaller bits from British Customs, an Andreani Misano cartridge kit for the forks, and K-Tech shocks.

Nova also improved the brakes with Brembo parts, and routed the rear lines to inside the frame. Clip-ons, rear-sets, an adaptive LED headlight; the parts list is as mouth watering as the perfectly-proportioned silhouette.

1968 Royal Enfield Interceptor The current day RE Interceptor is a 648 cc parallel twin with fuel injection and disc brakes. But our friends at Silodrome have just given us a glimpse of its ancestor: a rare original 1968 Interceptor that's about to go on the auction block at Mecum .

The Interceptor was first released in 1960 with a 692 cc parallel twin motor, and was Royal Enfield's fastest production bike at the time. By 1962, capacity had been bumped up to 736 cc, with a bunch of internal upgrades including a dynamically balanced crankshaft.

This one here is a 1968 Series 1A Interceptor---a model that featured further updates, like a coil ignition, a chromed fuel tank, and a new seat, handlebars and fenders. It's a looker too, thanks to a full cosmetic revamp done just three years ago, and a fresh mileage of just 19,473 miles. It also has a new clutch, brakes, tires and cable.

Designed to go head-to-head with brands like Triumph and Norton in the US desert racing market, the Interceptor reportedly didn't sell in big numbers---making good condition examples particularly rare. If this one floats your boat, why not put in a bid? [ Via ]

The foldable Excelsior Welbike Motorworld by V. Sheyanov is a Russian collection of rare and fascination wartime machinery. They have a knack for finding and restoring the most obscure of motorcycles---like this foldable paratrooper bike.

The Welbike, which came out in 1942, was built by Excelsior---Britain's first motorcycle company. It was powered by a single cylinder, two-stroke 98 cc engine, mounted horizontally in the frame. It had no gear box, no headlight and just a rear brake, with a top speed of 30 mph on flat terrain.

It was essentially developed as a 'parascooter,' to be dropped alongside paratroopers as a mode of transportation on the ground. The Welbike would be stored in a container, and could be assembled in 10 seconds by unfolding its handlebars and raising its seat.

The only problem was, it wasn't particularly effective. Due to the massive weight difference between the Welbike and the average paratrooper, they would often land far apart from each other. And with tiny wheels and not much power, it was often abandoned in rougher terrain, where going on foot was actually quicker.

Post-war it wasn't a hit either, since it wasn't street legal. Most Welbikes ended up being exported to North America, and sold in department stores, before it was discontinued in 1954. The Welbike might not have been particularly successful, but it sure is cute, and has our heads filled with ideas for a modern electric version that could fit in a car's trunk. [ More ] 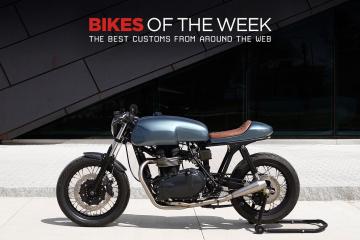