Watch The Kawasaki Ninja Evolve, From The 1980s To Now

Ever wonder about the origin of the Ninja? Not the lethal assassins of feudal Japan, but Kawasaki's line of awesome sportbikes? This video, incomplete as it is, gives you a pretty good overview of the line's history.

This is pretty much a just-the-facts-mam assessment of Kawasaki's flagship superbike, starting with the 1984 GPZ900R. The idea of a liquid-cooled superbike was nothing new (Honda had its VFR series out for a while, at that point), but Kawasaki's machine was powerful, light, aerodynamic, and it had that cool, exotic name. Its appearance in the hit 1986 film Top Gun didn't exactly hurt its sales, either. Who wouldn't want to rip around San Diego on a muscular superbike, in between flights in your F-14, games of beach volleyball, and hot dates with Kelly McGillis?

With a claimed 115 horsepower on tap, and a 151mph top speed, the GPZ900R was fast for its time (see an excellent promo vid for the machine here). Although Kawasaki introduced its successor, the GPZ1000RX, in 1986, it continued production of the 900 until 2003.

The GPZ1000RX was replaced in 1988 with the ZX-10, that year's fastest production motorcycle. The Top Gun influence continued, with Kawasaki calling the ZX-10 the Tomcat in some markets, after the F-14 fighter that Cruise flew in his film---that seems a pretty unlikely coincidence, anyway.

It's too bad this video doesn't go into all the other Ninja-branded bikes that did so well for Kawasaki, and kept so many riders happy. The Ninja 250, the long line of 600-class machines, the ZX-7---the YouTube clip ignores them all, and many of these machines were extremely influential in their own way. However, the supercharged H2 series makes an appearance at the end of the video, just as it's about to make an appearance in the upcoming Top Gun 2 movie. Let's hope it proves as popular as the GPZ900R was in the 1986 original. 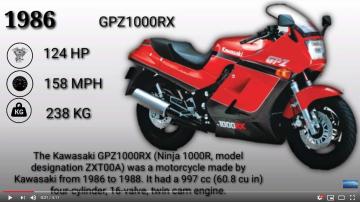