scramblers are more show than go. Stylistically, they hark back to the golden years of Californian desert racing---but you wouldn't want to actually race one across the desert.

There are only a couple of motorcycles that buck this trend, and the Ducati Scrambler Desert Sled is one of them. Even though it's not a full-blown enduro machine, it's surprisingly good off-road. So much so, that most reviewers refer to it as "the Scrambler Ducati should have built in the first place."

To find out just how much abuse it can handle, Ducati North America teamed up with the off-road apparel brand Fasthouse, to race a pair of Desert Sleds in the Mint 400 earlier this year. First held in 1968, the Mint 400 is America's oldest desert race, taking place in the Nevada desert around Las Vegas.

This year saw the debut of the Hooligan Open class, for 750 cc (and up) production twins to duke it out over two 80-mile laps. That's the class Ducati and Fasthouse entered, with Jordan Graham (#47) and Ricky Diaz (#51) piloting the two Desert Sleds.

"The Mint 400 has a great history, being North America's oldest and toughest off-road race. The entire event is far more than just a traditional off-road race---there's a great celebration around it in Las Vegas. It still has that romanticism built around the old desert racing legends."

Prepping the bikes for the Mint 400 was the responsibility of the Pikes Peak-winning Spider Grips team. So how did they take these Ducati Scramblers from 'surprisingly good' to 'desert proof?' With some racing know-how, and a bunch of well-judged upgrades...

One of the most essential changes was a switch from the Scrambler's 19F/17R wheel combo to a more dirt-worthy 21F/18R setup. Excel rims were laced up the stock Ducati hubs, then wrapped in Pirelli Scorpion rubber, and filled with off-road racing mousse.

Spider Grips needed to extend each bike's swing arm to fit the bigger rear wheel, so they turned to LA-Based Earle Motors . Alex Earle has designed a set of plug-and-play swing arm extenders for the Scrambler---the same ones he used on his ' Alaskan ' build.

Naturally, the suspension got some attention too. Race Tech upgraded the front forks with new tunable internals, and the team fitted custom rear shocks from Fox. Not only does the overall setup perform better, but there's slightly more stroke to play with now.

Next, the brakes were upgraded with Galfer rotors, and the sprockets with Supersprox parts. And a Scotts Performance steering damper was added to each Sled, for a little more control over the rough stuff.

The Desert Sled has decent ergonomics out-the-box, but these bikes lift the rider experience to a much higher level. The team installed Faast Company's Flexx handlebars, mounted on extended risers. They're unusual-looking bars; designed to absorb vibration by way of a system of pivots and elastomers.

Faast Co. also supplied grippy foot pegs---adorned with each rider's name---and hand guards. The grips are from Spider Grips' own catalog, and the shifters were upgraded with Hammerhead Designs units.

All of the Desert Sled's bodywork remained, but the seats were recovered. And the mirrors, license plate holder and all lights (except the tail light) were all ditched.

There's a number board on the front of each bike now, sitting on fork-mounted clamps (rather than held on with cable ties). Peek just above it, and you'll notice that the stock dial has been remounted on a sturdier custom-made bracket. And since renegade rocks are an integral part of desert racing, BJ Manufacturing fabricated a pair of burly skid plates.

A few parts came out of Ducati's own aftermarket catalogue---like the full Termignoni exhaust systems, and the oil cooler protectors. Each bike was tuned with Ducati Performance mapping too.

To make sure both Sleds looked even better than stock, Airtrix Designs whipped up a race livery that riffs off Fasthouse's brand identity, with some Ducati red in the mix. Gaffer tape was laid down around the edge of each tank's bolt-on side panels, under the paint, to stop the riders' pants from getting snagged.

So how did the bikes fare? Pretty good: Graham won the Hooligan Open class by a remarkable 45 minutes, and Diaz would have finished second, had he not smashed his gear shifter in the rock fields on the second lap.

It's a testament to the Desert Sled's capability, and the Spider Grips team's savvy to know just what to tweak to make it truly rowdy. With any luck 'hooligan' desert racing is here to stay, and more OEMs will step up to the plate. 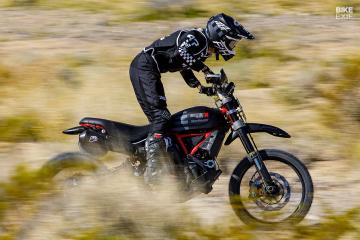