KTM To Welcome Its First 500cc Twin Motorcycle In 2022

As Sabrina's eagle eyes spotted in December, 2019, KTM has been hard at work developing its middleweight 490 segment. At that time, a total of five bikes, including an ADV, two dual-sports, a naked bike, and a sportbike were all delineated in this chart. What wasn't clear was the timeline, but as time marches on, Pierer is talking more about the details.

In an interview with Les Repaires des Motards, Pierer confirmed that the coronavirus pandemic not only didn't slow down any timelines; it's in fact sped them up. Pierer said the company feels that the 500cc segment will become especially important in markets with A2 licenses, as well as being something for developing markets to move up to from their 125, 200, and 390cc bikes.

To that end, KTM's R\&D engineers are working closely with Bajaj's R\&D team, and all development on the 500cc parallel twin bikes is happening at Bajaj HQ in Pune, India. Pierer said it's similar to the configuration used for the 790 and 890cc parallel twins KTM currently uses, only in a smaller-displacement package. This engine will be used to power several bikes across the KTM and Husqvarna ranges, and Pierer says we can expect the first ones to roll out as soon as 2022.

In other engine-related news that will probably surprise no one, Pierer also confirmed that the 890 Duke engine will power the production Husqvarna Norden 901. It was probably the only logical choice in the current lineup, but it's still good to have official confirmation going forward.

What about GasGas? Production versions of enduro and motocross GasGas bikes to correspond with existing KTM entries in those categories should go into production in September 2020, per Pierer, with the enduro bikes also being Euro5-compliant. While the TXT piston-powered trials line was introduced in May 2020, Pierer also confirmed that an electric version, the TXE, is currently in development as well. 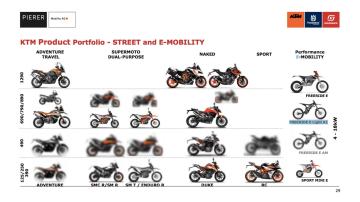