Ducati’s planned V4 Superleggera is expected to be one of the world’s most powerful street-legal super bikes with 167kW (224hp) at 15,250 revs.

Throw on the optional Akrapovic full racing exhaust system and power is boosted to 174kW (234bhp), even beating the supercharged Kawasaki H2 at 171kW (230hp).

A leaked photo and details show the largely carbon-fibre bike will weigh just 152kg which is 20kg less than the V4R, hence the term superleggera (super light).

Superleggera will be produced in a limited edition of 500. We expect they will only be available here on order.

Ducati is expected to start production in April 2020 with deliveries the following month.

Like the V4R, it will have bi-place wings plus extra winglets to increase downforce at 270km/h from 30kg to 50kg. 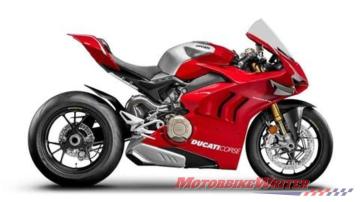